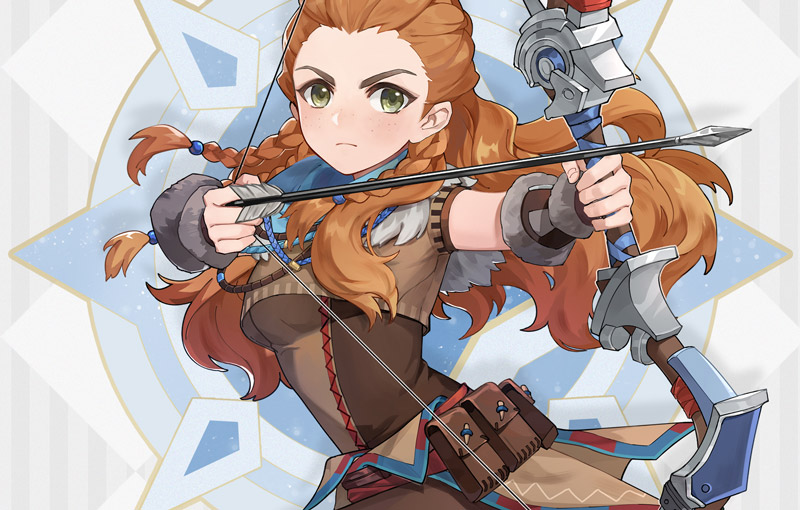 Aloy’s taking a break from the Forbidden West to explore Teyvat.

MiHoYo has announced a rather surprising new playable character for Genshin Impact: Aloy from Horizon Zero Dawn! The developer has teamed up with Guerrilla Games to bring the iconic machine-slaying archer to the land of Teyvat… for free. That’s right, no gacha rolls required.

Aloy is referred to as a, “Saviour From Another World,” in-game, which confirms that she hasn’t been hanging out in Teyvat all this time unseen. As a playable character, she comes with archery abilities and brand-new Cryo Vision, which lets her wield unique elemental powers during combat and exploration. She’ll join the Traveler as they unravel Teyvat’s many secrets.

Watch the trailer for the game’s latest expansion:

So, how do you get her? Here’s the good news: Aloy is free of charge for all Genshin Impact players, but PlayStation players also get early access to her. In Version 2.1, PlayStation 4 and PlayStation 5 players with Adventure Rank 20 or above will receive Aloy via in-game mail. From Version 2.2 onwards, players on all other platforms will also get Aloy through in-game mail.

PlayStation console owners also get a free four-star Bow that gives Aloy a unique buff during Version 2.1 and Version 2.2. Make sure you log in to grab these goodies, as they’re not automatically added to your inventory. We don’t have a release date for Aloy’s arrival in Genshin Impact, but MiHoYo has mentioned that she’ll be a limited-time offer.

Aloy’s been making the rounds in videogame crossovers, which just goes to show how popular she’s become. She’s crossed over to Fortnite, Monster Hunter, Death Stranding and now Genshin Impact. What’s interesting is that MiHoYo also mentioned that Aloy represents this game’s, “first collaboration,” which implies that more crossover characters might hit the game eventually.

For now, you can dive into Genshin Impact’s big Inazuma expansion, which adds a new region and lots of other content to the game.

Join HWZ's Telegram channel here and catch all the latest tech news!
Our articles may contain affiliate links. If you buy through these links, we may earn a small commission.
Previous Story
Electronic Arts officially reveals the Dead Space remake with a creepy teaser
Next Story
Netflix's trailer for The Witcher: Nightmare of the Wolf unveils Geralt's mentor