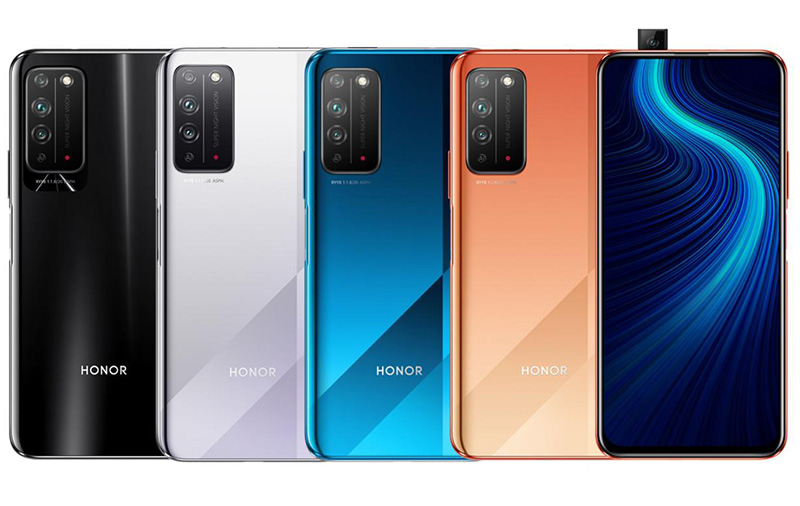 It’s open season for Chinese phone manufacturers to release new Android handsets and, really, it’s getting hard to keep track of all of them. According to Huawei Central, Honor is set to unveil a new X10 series this coming May 20 in China.

Said to be available in four colours (black, silver, blue, and orange), the Honor X10 is yet another 5G handset powered by the 7nm Kirin 820 chipset.

Turning the phone over and the leaked renders are showing a glass back with a Galaxy S20-like rectangular camera bump. Current word is that this is a triple-lens setup that packs a 40MP, f/1.8 Ultra Vision main camera based on a custom-made Sony IMX600y sensor with an RYYB filter, an 8MP, 120-degree ultra-wide-angle camera and a 2MP macro camera. And on the front, instead of under a notch, the selfie camera (using a 16MP Sony IMX471 sensor) is housed within a pop-up module.

Honor is also expected to unveil a souped-up X10 Pro. The main difference is that the Pro is swapping the macro camera for an 8MP camera with 5x optical zoom.

To round things up, both the Honor X10 and X10 Pro are said to sport IP5X dust protection and include a 4,300mAh battery that supports 22.5W fast wired charging over their USB-C port. Wireless charging is also onboard.

Join HWZ's Telegram channel here and catch all the latest tech news!
Our articles may contain affiliate links. If you buy through these links, we may earn a small commission.
Previous Story
BYD's Model 3 rival is called the Han and does 0-100 in just 3.9 seconds
Next Story
Watch the first trailer for Assassin's Creed Valhalla, coming this holiday