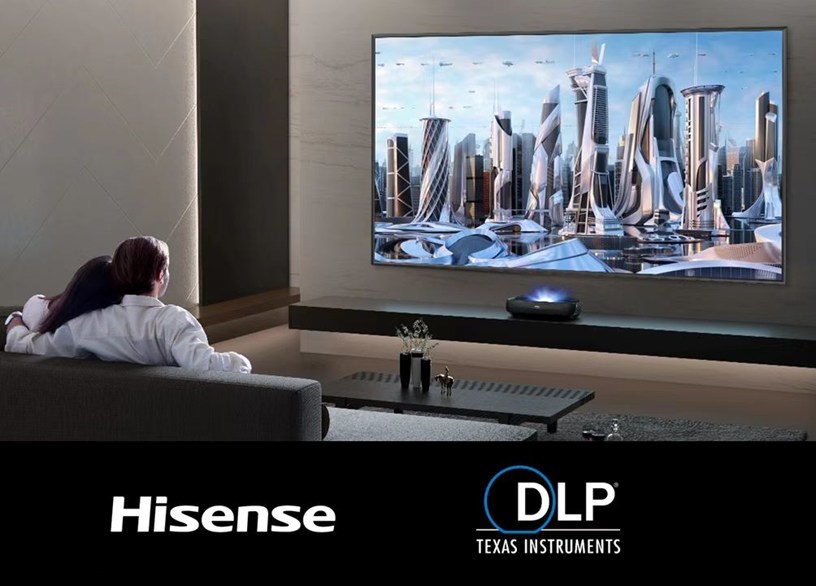 Hisense has been parading their 'Laser TVs' for many years now as an 'affordable' option to have screens as large as 100 inches across but priced far less than a conventional TV and can handle 4K HDR output. Based on the concept of ultra short throw projection systems using a strong laser light source shining through a colour wheel and having the light hit the surface of a DLP chip from Texas Instruments (which is essentially a DMD or Digital Micromirror Device that's made of millions of micromirrors with each mapped to one pixel of the image resolution) to process and project light through the projector's lens, Hisense rebranded this as a 'Laser TV' system that can project to any wall or a suitable screen.

This is really interesting because Texas Instruments' official best offering is a 0.78-inch DMD chip that has a native resolution to support 4K UHD DLP, and there's no listing of a 0.94-inch offering at the time of reporting. The press release also cited that it would enable more than 33 million pixels (which matches the number of pixels required for 8K resolution), but it's unclear if it's the native resolution of the DMD chip or it's based on the upscaled technology employed.

To date, there is no native 8K resolution projection system for consumers (and prosumers), and any 8K projection system targetted at home theatre enthusiasts has been based on pixel-shifting technology that has first enabled upscaled 4K projection without the high cost (such as this recent BenQ projector we've reviewed), and in the same vein, they are now used on premium native 4K projectors to boast 8K upscaled projection.

Regardless, a larger DMD chip is still a wonderful development as that would mean it can either pack more micromirrors for a higher native resolution, or it could offer up brighter projection thanks to a larger micromirror pitch that's useful to recreate more vivid HDR scenes. A brighter projection would also mean it could comfortably support projecting to unusually large screens and massive living rooms.

Perhaps Texas Instruments has yet to announce this officially in their catalogue, as it could be a collaboration with Hisense to be their launch customer. Having it on the published catalogue would mean partner vendors could then work with the company to offer updated projection systems as well. There's also no firm product announcement from Hisense via a model name/number, but we expect them to make further headway at CES 2023. Stay tuned for more updates on this development as HardwareZone drops by the most important global tech show of the year.

Join HWZ's Telegram channel here and catch all the latest tech news!
Our articles may contain affiliate links. If you buy through these links, we may earn a small commission.
Previous Story
LG unveils its new soundbar lineup ahead of CES 2023
Next Story
OnePlus 11 gets 4 January debut in China, first photos revealed