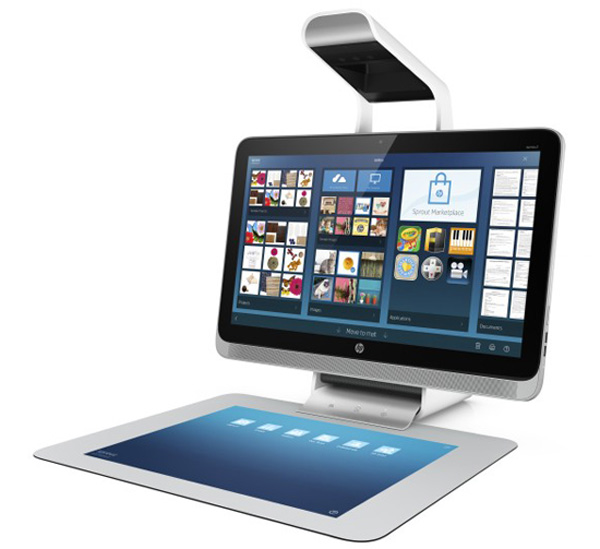 Remember the scene in Iron Man where Robert Downey Jr. reaches out to a hologram and manipulates it by twisting and turning his fingers? HP’s new desktop computer is bringing us one step closer towards that by way of the HP illuminator – a clever combination of a 14.6 MP high-resolution camera, DLP projector, and Intel RealSense 3D technology for instant capture of 2D and 3D objects – and the 20” diagonal, 20-point touch-enabled touch mat which also acts as an opaque base for scanning.

While it comes with a keyboard and mouse, Sprout is really meant to be used with your fingers, the included stylus, and the spill-resistant mat. If you need to type anything, the system projects a touch-sensitive keyboard onto the mat (which recognizes up to twenty touches at a time so you can touch type away to your heart’s content.)

But that’s not all the mat is for. Place an object on the mat for the HP illuminator to scan and the system will create a virtual copy that you can manipulate using a stylus or typical touchscreen controls like swipe and pinch in HP’s Workspace software. HP terms this: ‘blended reality’, and the idea is to bring a tactile sense to ideas and creativity, letting you literally see your ideas take shape on the mat.

For example, through Sprout’s collaboration software, you and your teammates can have a discussion on the main monitor, while working on a shared project on the mat. Apparently Microsoft has already integrated scanning functions into a Sprout-optimized version of Office so you can scan printed text to insert straight into a document, and easily add scanned images into PowerPoint and Word.

It seems the system will be limited to 2D scanning to begin with, but a tilted turntable and 3D-modeling software has been planned for mid-2015, which would really start to make things interesting for graphics and animation workflows. If the scanner looks familiar, it's most likely because the Sprout shares quite a bit in common with the TopShot LaserJet Pro, which also featured innovative 3D scanning capabilities.

The Sprout runs with an initial configuration of a 3.2GHz quad-core Intel Core i7-4790S CPU with 8GB RAM , and a NVIDIA GeForce GT 745A graphics card with 2GB RAM. The main display is a 23-inch 1080p LCD screen, and the machine comes with a 1TB HDD/SSD hybrid drive. There’s an HDMI port, two USB 3.0 and two USB 2.0 ports, an SD/SDHC/SDXC card reader, and a set of stereo speakers.

For now, the Sprout is only available for preorder as a full system via the HP site in the United States at a cost of USD$1900, but shipments are supposed to go out on November the 9th, so perhaps we’ll see them in the region by early 2015?

Join HWZ's Telegram channel here and catch all the latest tech news!
Our articles may contain affiliate links. If you buy through these links, we may earn a small commission.
Previous Story
Sony keeps its promise, Z2 series gets PS4 Remote Play
Next Story
HTC's new charger fills up your HTC One M8 40 percent faster