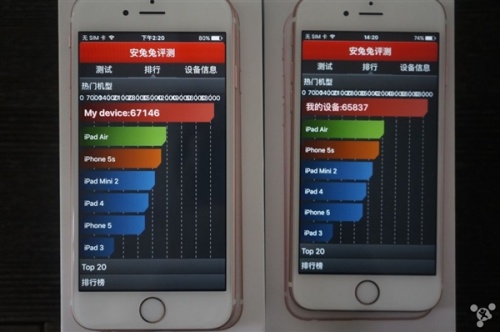 In case you missed our previous news, here's a quick recap - Chipworks discovered that there are two different sized A9 chipsets used in the Apple iPhone 6s with one made from Samsung and the other from TSMC. As the Samsung-made A9 is 10% smaller, it is believed to be faster and more power efficient in theory. Chinese site MyDrivers decided to put the two chips to the tests and the results are quite unexpected.

According to MyDrivers, the TSMC-made A9 processor scored slightly better on average in the various benchmarks. In addition, the Samsung-made A9 chipset is found to run a bit hotter (40 degrees celsius vs 37 degrees celsius) and consumed more battery juice under similar test conditions.

Overall, most consumers should not be too bothered with these findings. During our review, the dual-core A9 chipset ran circles around the competition in most benchmarks. If you are curious as to what processor is used in your iPhone 6s or 6s plus, take a read here to find out how.

Join HWZ's Telegram channel here and catch all the latest tech news!
Our articles may contain affiliate links. If you buy through these links, we may earn a small commission.
Previous Story
Want to buy the Apple Watch Hermès? Take a look at their retail prices here
Next Story
Is the Apple iPhone 6s more popular than the 6s Plus in the first week of sales?