Here’s how you can pre-order the Nintendo Switch *updated*

Here's how you can pre-order the Nintendo Switch

Note: First published on 14th February 2017 at 12:30 P.M, we've since updated it with more retailers and bundle details. 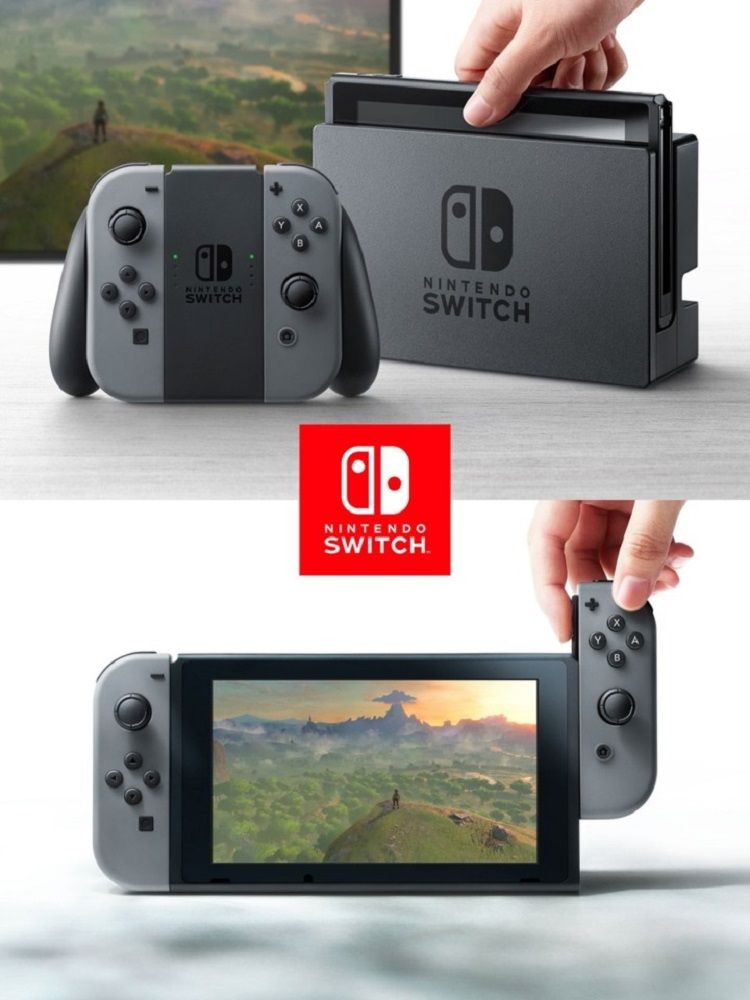 With the 3rd March 2017 launch date looming nearer, fans and users interested in the Nintendo Switch have been hitting up social media avenues of various game retailers in Singapore to secure a unit of this next-generation device.

According to GameAxis, Nintendo Switch’s regional distributor – Maxsoft – has not released the official pricing of the console and its games. However, the pre-order options are already available through various offline and online retailers. If you’ve not been clued in, here’s what the Nintendo Switch does, in a nutshell.

Currently, the pre-orders bundle the console with a handful of games, but it’s up to the retailer’s discretion. Without further ado:

This retailer based in Clementi (West-siders rejoice) will only have stocks for the Grey-colored Nintendo Switch. Their bundle will be going at S$659 with two games, 1-2-Switch, and Legend of Zelda: Breath of the Wild along with a one-year warranty from Maxsoft.

There’s an alternative for folks who do not want one of the two games. Buyers can opt to have one game removed from the bundle, and pay S$40 less instead. This means that a Nintendo Switch console with one game would retail at S$619 instead. Gamewerks said that one game must be included and that they have a strict cash-only payment policy for this console and its bundles. 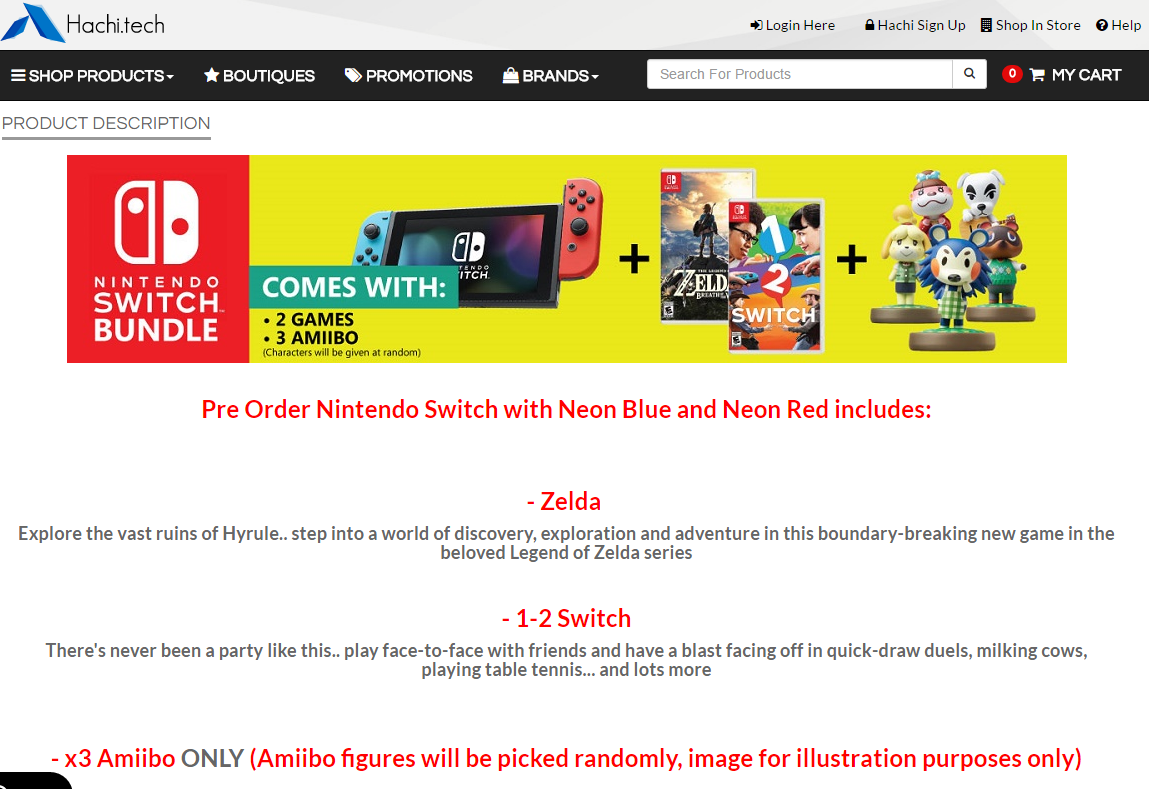 The e-store of Challenger bundles the Nintendo Switch, two games (1-2-Switch, and Legend of Zelda: Breath of the Wild), along with three random Amiibo figurines for a price of S$699. Pre-order will end on 28th February 2017 and the first units will be delivered on 3rd March 2017. There’s also the option to collect your purchase in-person at their chosen Challenger outlets.

Besides the extra Amiibo figurines, Hachi.tech also separated their online listing into two separate pages: this page is for buyers who prefer a Nintendo Switch with Red/Blue game controllers, and this page is for users who would prefer buying it in Grey instead. 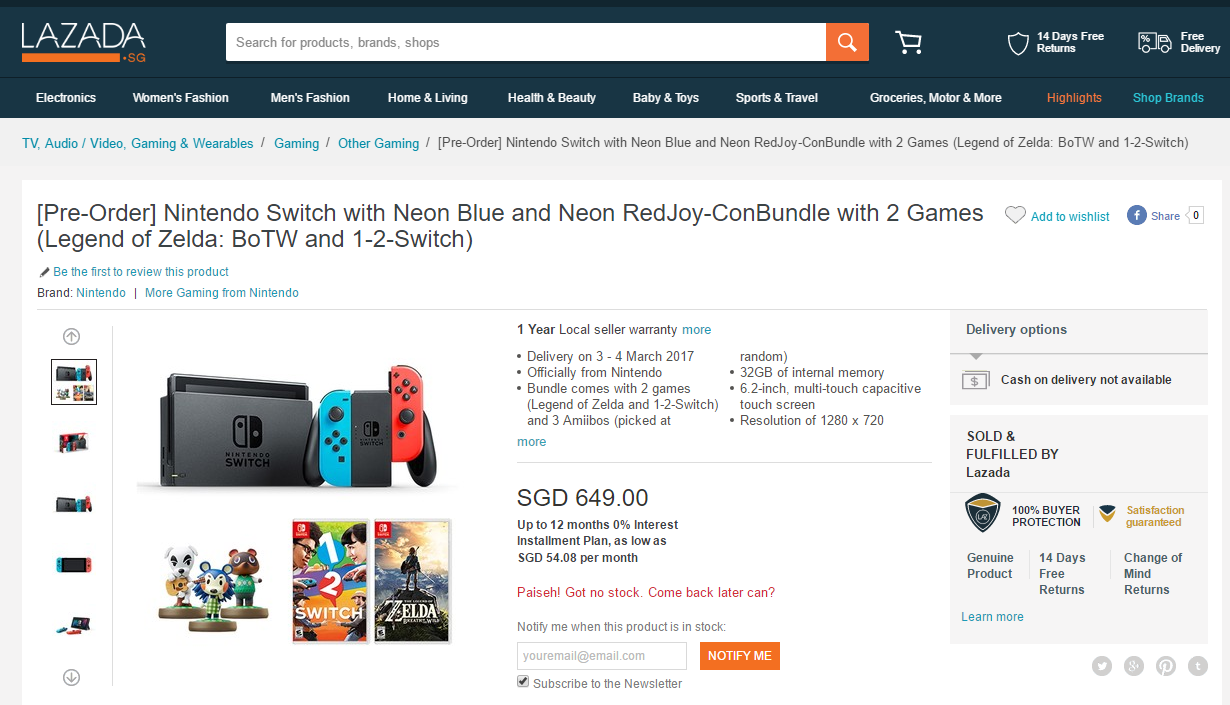 Updated on 3rd March 2017: Below are the bundles' URLs for your convenience.

Expected delivery will fall on 3rd or 4th March 2017, and buyers can utilize their 12-month, 0% interest payment plan to finance their purchase. 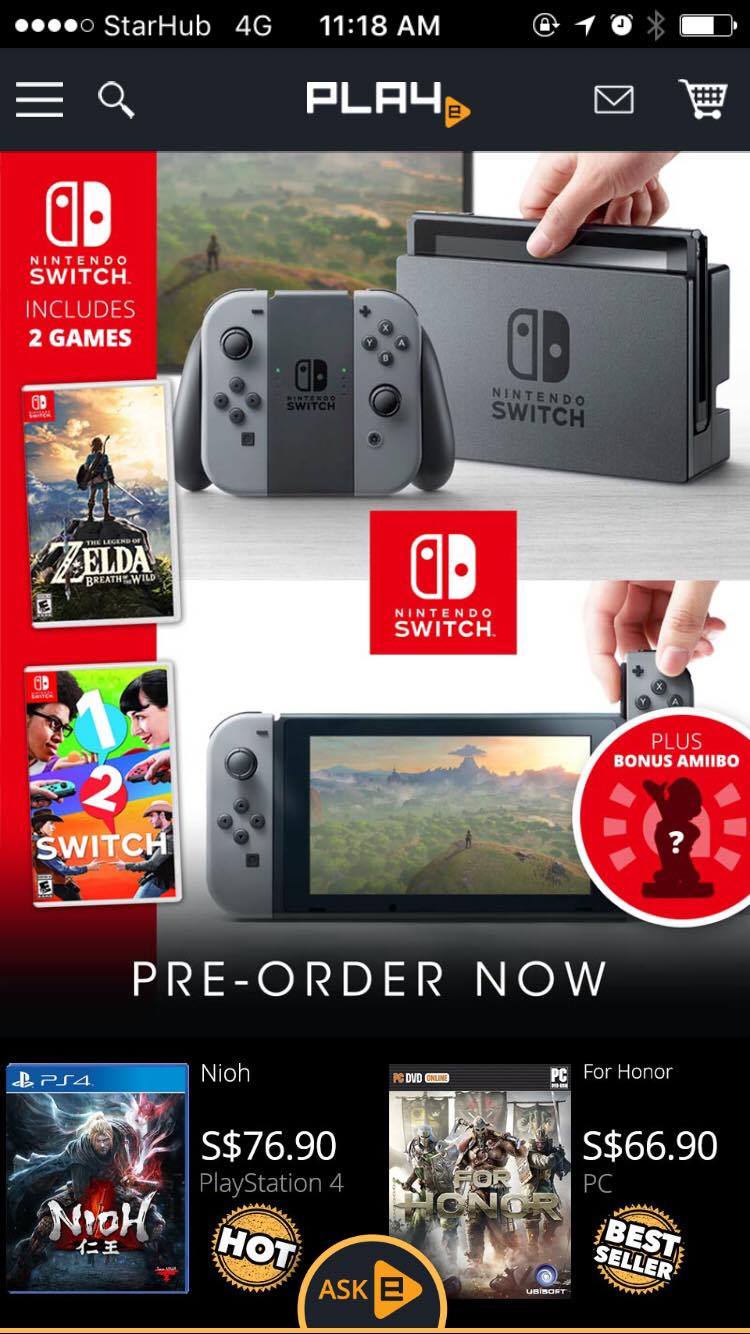 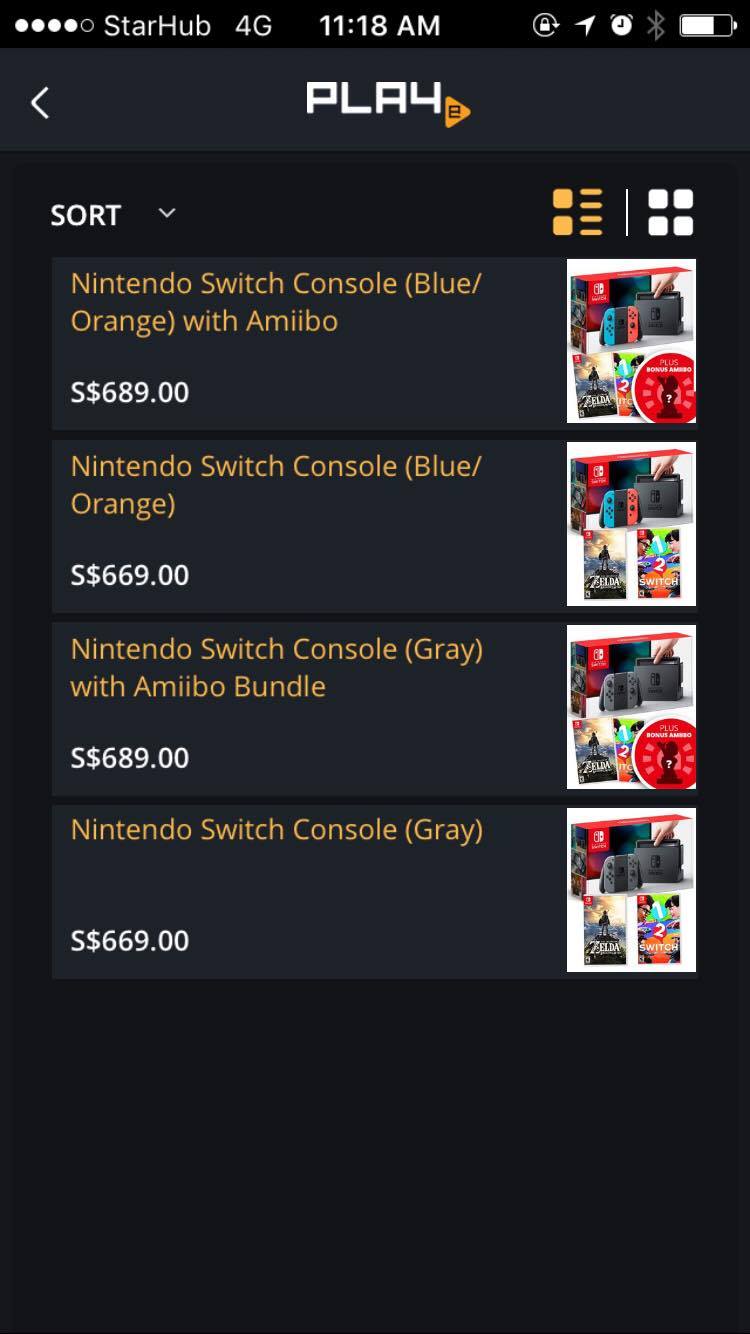 Retail chain PLAYe has the least amount of information available, with no mention of the Nintendo Switch’s pricing, possible bundles, or availability on their Facebook page. However, the retailer has a pre-order form available on their website.

According to GameAxis, pre-ordering through PLAYe revealed that the retailer is bundling 1-2-Switch and LoZ: BotW with the console at an estimated price between S$600 to S$749. The console will be available with Red/Blue, or Grey controllers. To pre-order, a non-refundable S$50 deposit is required.

These bundles can be pre-ordered via their PLAYe app (Android OS here, iOS app here). Delivery of said bundles will occur on the Switch's launch day itself.

Popular games and console retailer Qisahn has their own pre-order deal coming through. The Nintendo Switch console will be bundled with both games (1-2-Switch and LoZ: BotW) at S$659. Both console colors, Grey and Red/Blue, are available, and folks who’ve pre-ordered will get their console on the Switch’s launch day (3rd March 2017).

According to Qisahn, the bundled games are physical copies, and there’s already a one-year warranty included in the purchase. Buyers who are not satisfied with the delivery date, pricing, region, warranty or the “offer in general” can have their deposit fully refunded at no penalty. 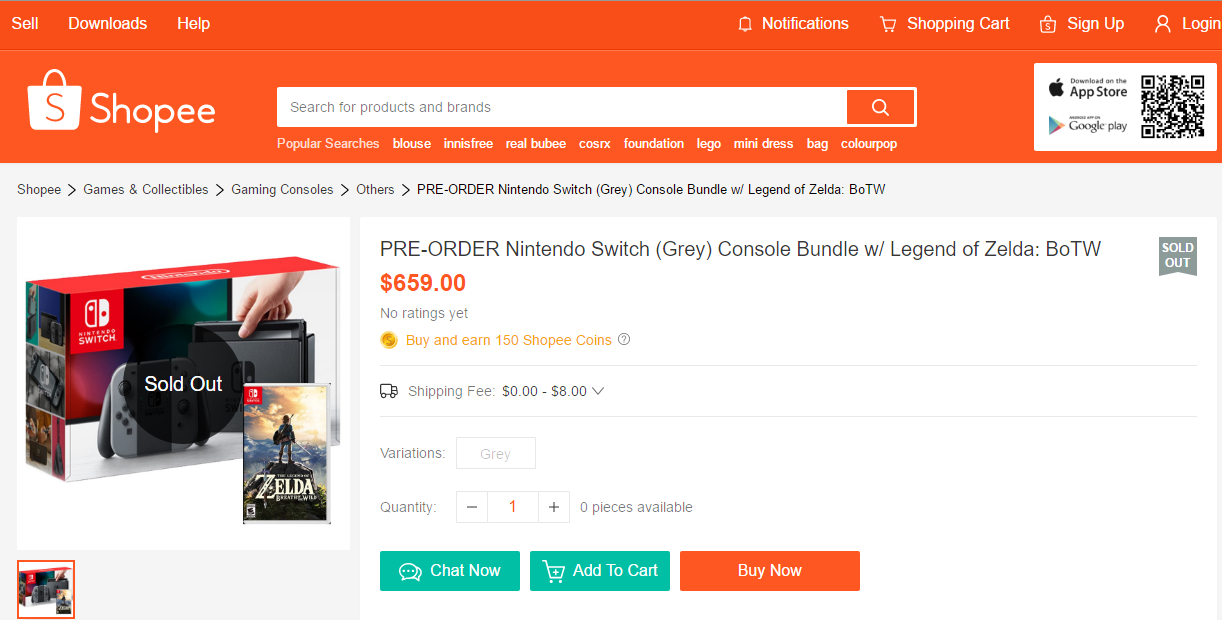 Updated on 16th February 2017: Online retailer Shopee will also be doing a pre-order run that will start on 16th February 2017. The console will be bundled with the LoZ:BotW game at S$599 for all pre-orders (listing found here). Formerly, it was for the first 100 customers, but Shopee has decided to lower the price twice in two days further after this piece was published. Note that the Shopee exclusive does not come with the other commonly bundled game, 1-2-Switch. Also note that this bundle only offers the Nintendo Switch in Grey.

The first units will be delivered starting on 3rd March 2017. This order is also fulfilled by Qisahn. However, users who purchase it through Shopee will have the option to have it delivered to their place. Alternatively, you can do a self-pickup at the game shop, located in Far East Shopping Centre.

Editorial note: Shopee reached out to us, offering a HWZ-exclusive new-buyer discount code, HWZ7OFF. It's valid until 5th March 2017 2359 HRS for new buyers, with a bunch of T&C stuff they need to declare below:

S$7 off with min spend of S$15. Valid for one-time use and not for Miscellaneous, Tickets & Vouchers Category. Promo code must be entered at the checkout page. Applicable to payments involving Shopee Guarantee (credit card & bank transfers only).

Let us know if you find more noteworthy Nintendo Switch offers floating around.

Join HWZ's Telegram channel here and catch all the latest tech news!
Our articles may contain affiliate links. If you buy through these links, we may earn a small commission.
Previous Story
The Samsung FlexWash is a top-load washer, front-load washer, and dryer all rolled into one
Next Story
iPhone 8 to have a "function area" at the bottom of the screen?