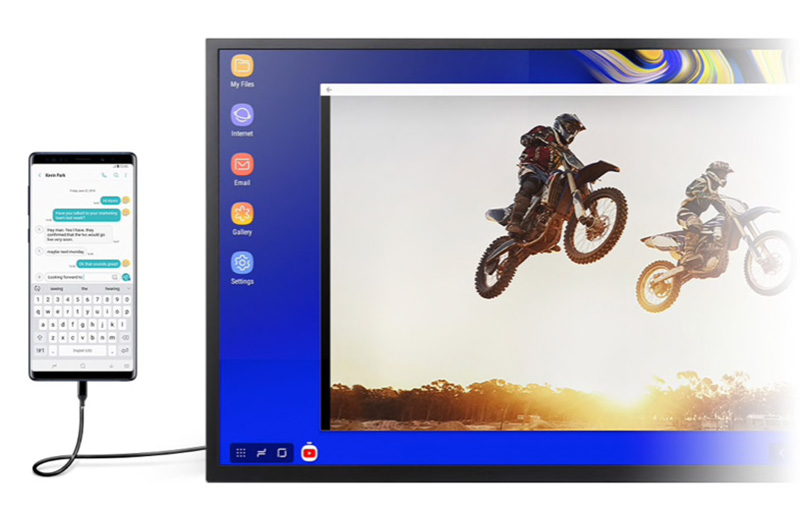 According to this Samsung community post in Korea, Samsung DeX — a feature that lets you extend your Galaxy mobile device into a desktop-like experience by hooking it up to a monitor, keyboard and mouse — has a few new features supported by the Galaxy S20 series.

Here are the three big ones:

In Windows 10, you can snap a window to one-half of the screen by dragging it to the edge. You can do the same with DeX now: just grab the header bar of an app and pull it to either edge of your screen. The existing keyboard method (Windows key + left or right arrow key) is still available.

2.) Using the phone as a multi-touch trackpad

When the S20 is connected to an external display such as a monitor or TV, the phone screen can now be used as a multi-touch trackpad. By default, a 3-finger touch will activate the back action and a 4-finger touch will bring up the apps. You can change these default gestures in the settings.

If you use Bixby Routines, there are new DeX-related parameters you can set. One example given is that you can have a routine that automatically turns on Bluetooth and Do Not Disturb mode when DeX is running (and reverses the actions when the session ends).

Finally, the updated DeX software also comes with the usual unspecified bug fixes and minor improvements. One known annoyance that’s fixed is that the search box in the Apps screen now properly recognises the first letter that you type on the keyboard. Before this, it always picked up from the second letter onwards.

Join HWZ's Telegram channel here and catch all the latest tech news!
Our articles may contain affiliate links. If you buy through these links, we may earn a small commission.
Previous Story
Huawei introduces new Smart Charging Mode to improve your phone battery's lifespan
Next Story
Samsung has shipped its first Android 10 update for the Galaxy Fold