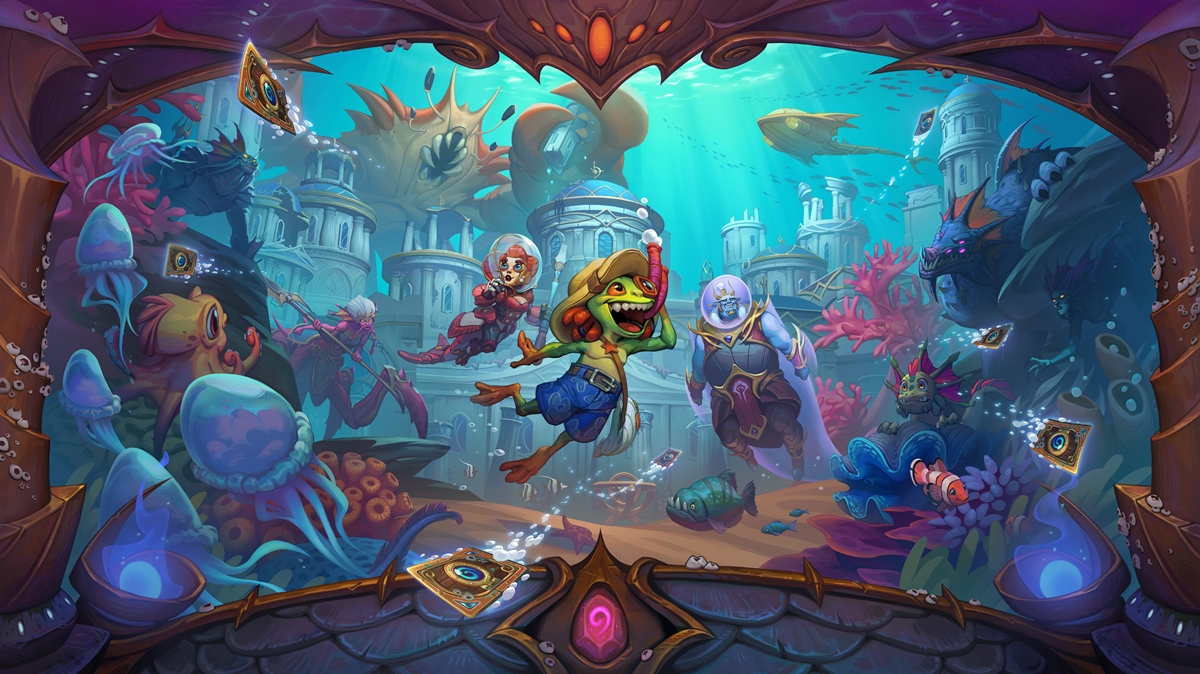 After spending the last few months wandering about the dusty Alterac Valley, going for a refreshing swim certainly sounds like a tempting proposal. On that note, don't forget to pack a spare bathing suit.

And if possible, something to deal with the Nagas too.

That's right - Hearthstone's newest expansion, Voyage to the Sunken City takes you on an adventure to the lost underwater city of Zin-Azshari. Scheduled for release next month on 12 April, the set features a whopping 135 new cards and introduces the spell-centric Naga minion type, on top of the Dredge and Colossal keywords.

First up, let's see what the Nagas have to offer. Led by the devious Queen Azshara, which will be available as a Mage Hero Portrait with the usual 80-pack pre-order Mega Bundle, the archetype's quirk comes online when the player casts a spell or satisfies a similar condition with the Naga card already in hand. For example, the 2-mana Spellcoiler (below) allows the player to Discover a Spell if they've already cast one while holding it. 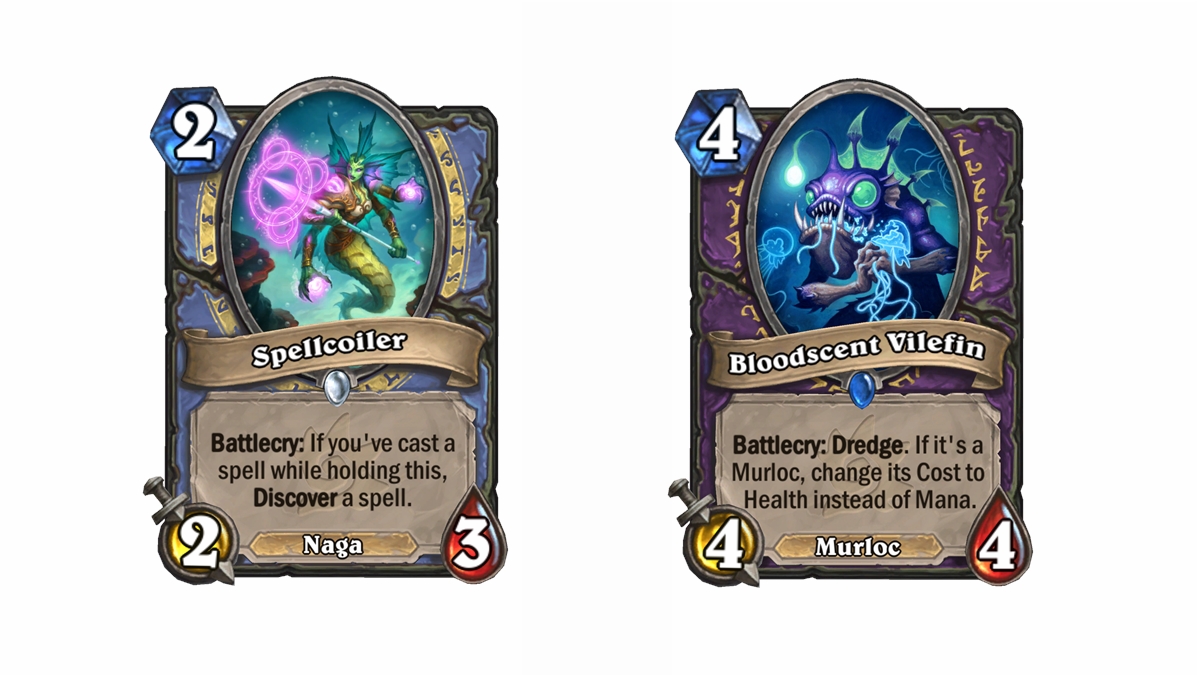 As for Dredge, it's kind of like an indirect "scry" - an umbrella term describing the ability to check the top card of a player's deck. However, instead of checking the top card directly, Dredge involves checking the bottom three cards of the player's deck and choosing one of them to place on top. Being able to confirm a draw is big in Hearthstone given the fundamental randomness of its gameplay formula, and that goes double for combo or tempo-centric decks that have specific plays for different situations. Naturally, this means that Blizzard will have to be particularly careful with how they balance it.

However, as powerful as Dredge sounds, it is arguably the Colossal keyword that feels the most unbalanced at the moment. Colossal minions are able to spawn a pre-set number of "appendages" when they're played and using the 7-mana Xhilag (above) as an example, that means you're basically getting a 3/6 body with FOUR additional 1/2 minions that deal exponentially more damage for free as the game goes on. That's some pretty insane value for just 7-mana, and if you need a reference point, the closest comparison from the Alterac Valley expansion would probably be the 8-mana Raid Boss Onyxia, which is itself borderline broken in terms of board value. 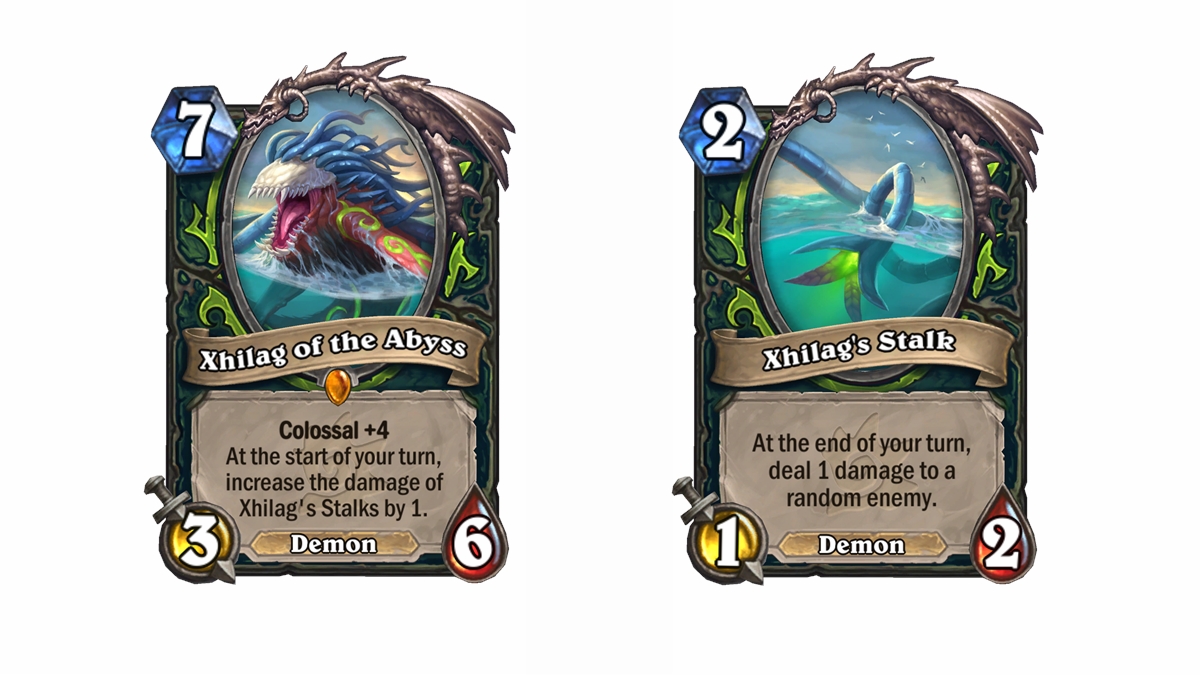 At this point, the argument then circles back to how well the developer team can balance it out, but that's an argument we'll reserve for another time, place, and platform. Regarding the pre-order bundles, Voyage to the Sunken City follows the same trend as its predecessors, offering a standard 60-pack bundle as well as the aforementioned 80-pack Mega Bundle. Additionally, all players will also receive the free Blademaster Okani Neutral Legendary when they log in after the patch.

For more information, feel free to browse through the official expansion page.

Join HWZ's Telegram channel here and catch all the latest tech news!
Our articles may contain affiliate links. If you buy through these links, we may earn a small commission.
Previous Story
LG is considering to supply OLED panels for the MacBook
Next Story
Samsung brings Galaxy A53 5G and A33 5G to Singapore