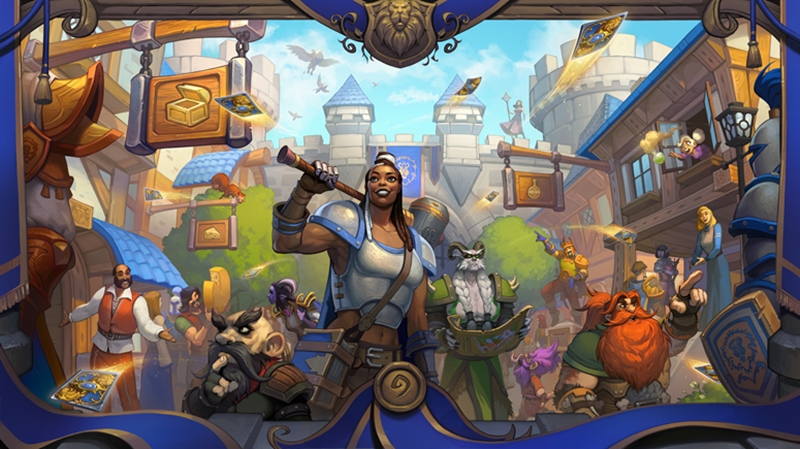 Well met, adventurer! It's been a while since we've seen any new faces in the Tavern, but the Year of the Gryphon is just getting started. And by that, we mean that Blizzard has announced the next mainline Hearthstone expansion, United in Stormwind.

Like all of the expansions before it, this instalment features a unique, distinct theme. This time, the spotlight is centred on the interesting mix of people and cultures that dwell within the bustling port city of Stormwind. From the usual faces like Demon Hunters and Stormwind Knights, to exotic pink Elekks and even a squirrel wielding a sword, players will be able to test their mettle against (or with) this diverse community a month from now on 3 Aug. Accordingly, such an announcement also means that pre-orders for booster packs have started, so make sure to place an order in the shop or on Battle.net during the usual promotional period.

Apart from the regular slate of quirky Legendaries and interactions that we get from each new expansion, not to mention the Battlegrounds updates and the all-new Fire Festival (which we'll cover in a bit), United in Stormwind primarily introduces two revolutionary new keywords: Tradeable and Questline. Both are definitely interesting in their own right, but it is the first of these that we feel really shakes things up. 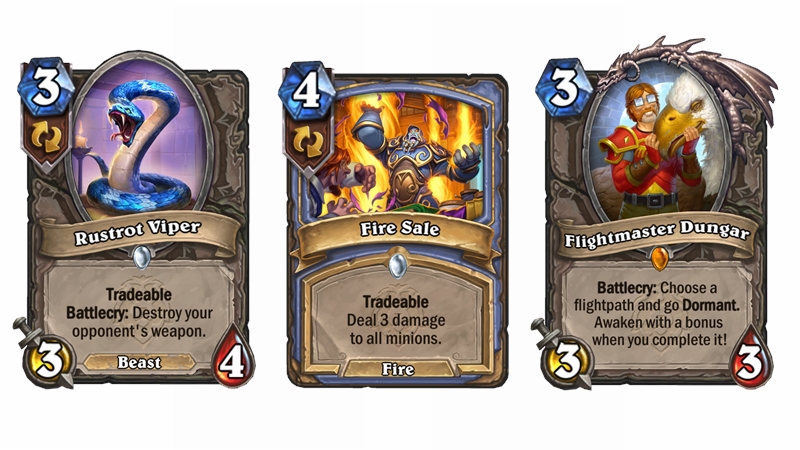 During their respective turns, if a player has a card in hand that features the Tradeable keyword, they can drag it over to their deck to reshuffle it in and draw another card. Of course, it's not free-of-charge - each swap will cost you 1 mana to perform, though the assumption is that you should be able to do it as many times as you want provided you have the relevant cards and mana. Alternatively, should the turn player choose not to perform a swap, the card will remain in their hand as per normal, and they will still be able to play it as a regular minion or spell with no penalties.

While this isn't a dedicated "tutor" mechanic per se given the card you draw is still random, being able to exchange situationally useless cards for something that's potentially better is huge in Hearthstone, especially for classes like Priest and Rogue. After all, we've all been in that situation where we pray for an Eviscerate and end up drawing something pathetic like Preparation instead. So, even if it's not a guaranteed "get out of jail free" mechanic considering it only works with certain cards, it's still nice to have the option around. 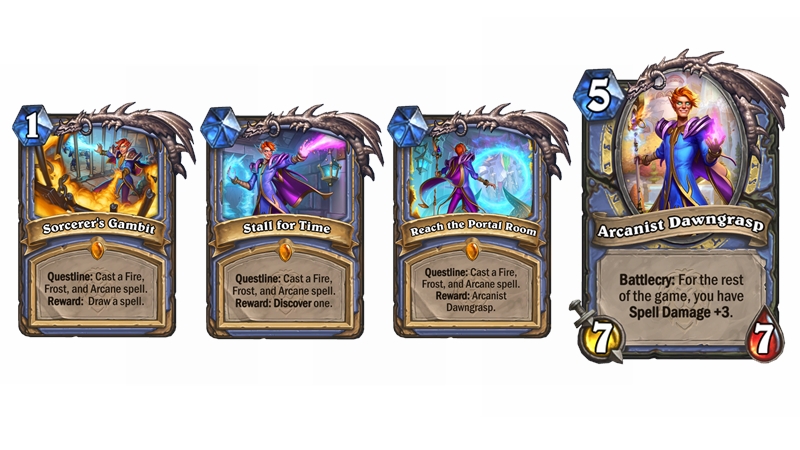 As for the second mechanic, Questlines are sort of an "incremental" version of the existing Quest mechanics that we're familiar with. Rather than providing a big boost for completing a single, overarching objective, Questline cards are divided into three stages, each of which are unlocked when the previous one is completed. Like its predecessors, the initial 1-mana Quest card will be drawn at the start of the game, and completing the first two stages nets you small card advantages, like drawing a spell from your deck. However, after completing the third and final stage, the rewards increase exponentially, providing players with borderline-ridiculous cards like Arcanist Dawngrasp (shown above).

As for the upcoming Fire Festival, which begins next week, it seems that Ragnaros the Firelord intends to host a house party in the Firelands, and all "insects" are invited to attend. The limited-time event, which lasts from 6-27 July will feature special Legendary quests and fan-favourite Tavern Brawls, on top of two new lore additions to the Singleplayer mode. Namely, the devious Warlock Guldan will be taking his place in the Book of Heroes on 20 July, while Kurtrus will likewise receive his entry in the Book of Mercenaries a week earlier on 13 July. Finally, here's the full announcement trailer if you'd like to check it out.

Join HWZ's Telegram channel here and catch all the latest tech news!
Our articles may contain affiliate links. If you buy through these links, we may earn a small commission.
Previous Story
Adidas Running announces new colourway for the Adidas 4DFWD
Next Story
Ghost of Tsushima Director's Cut launches in August with a story expansion