Hearthstone out now on phones

Hearthstone out now on phones 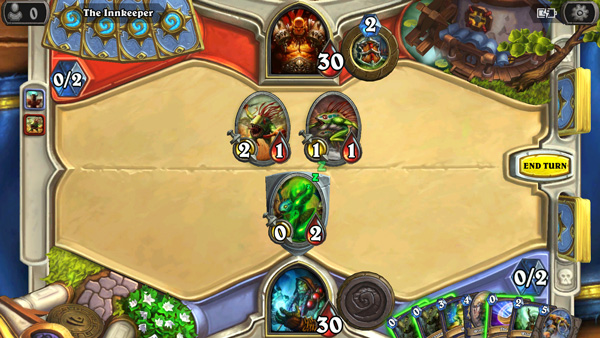 It's finally here. The day when you finally break that data cap on your phones. Hearthstone is now out on iOS and Android phones, along with all the expansions that's been released thus far.

We've mentioned about how it came to the tablets last year, but this is probably the first time most people will really give it a shot on mobile device. After all, not everybody owns a tablet, but we bet nearly everybody owns a smartphone these days. Since you can link your accounts between devices, there's practically no reason not to download the phone version if you don't have a tablet. Blizzard's also sweetening the pot by giving players who complete a game on the phone version a free Classic card pack.

Having played a few matches on a Sony Xperia Z3, we can safely say that the game is practically identical to the PC or tablet versions, just with a smaller screen. The loading is a tad longer (this will of course vary depending on your hardware) but it's bearable. There's a bit of stuttering in the initial animations every time another player's, AI or otherwise, turn comes up but it's easily overlooked and likely will go unnoticed once you get used to it. Overall, our initial impressions of the game are pretty positive.

You can get it on the respective OS stores right now. Here's the link to the iOS page, and here's the Google Play link.

In other Blizzard news, the first batch of BlizzCon tickets are going on sale at 1000hrs today, USD$199 each. So if you're planning to hit up Blizzard's annual convention physically, you can start refreshing the ticket page right now because if past BlizzCon's are any indications, the tickets sell out in minutes. Don't worry if you miss out though, you can still try your luck when the second batch goes on sale later this week. Of course, there's always the digital virtual ticket option if you're really desperate.