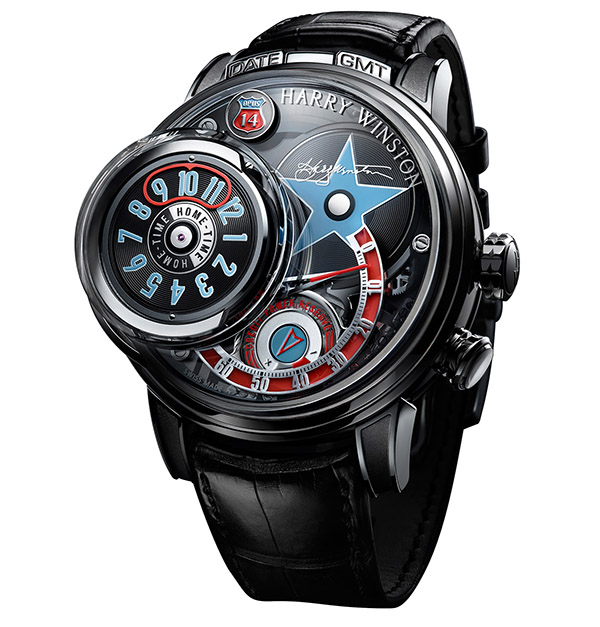 Harry Winston just unveiled the Opus 14, the latest watch in its long running series of Opus watches. Opus watches have always been fantastically complex and the latest Opus 14 is no different.

Heavily inspired by classic jukeboxes, the Opus 14 is at heart a traveler's watch and features home time and second timezone indications. The home time is always shown at 8 o'clock on the disk. The minutes are shown using a retrograde display at 4 o'clock and within it is a sub-dial that shows the power reserve.

A selector at the side of the massive 54.7mm case at 9 o'clock lets users command the watch to toggle between the second timezone and date. When selected an arm will pull out the corresponding disc from underneath the home time dial and display it at 2 o'clock - just like jukeboxes of old. There are three discs in total, one that shows the second timezone, another that shows the date, and a third that displays the Harry Winston Star. See how it works in the trailer video below.

And it is this automaton that makes the Opus 14 so complicated. In fact, the movement consists of over 1000 parts, including a whopping 124 jewels and 31 bridges. The movement was designed by watchmakers Franck Orny and Johnny Girardin, who earlier worked on Montblanc's equally bonkers Metamorphosis watch from 2010 which has a changing dial (you have to see it here).

Previous Story
ZENS’ Qi add-on turns your desk into a wireless charger
Next Story
The NZXT Hue+ is a smart, custom lighting solution that responds to your system