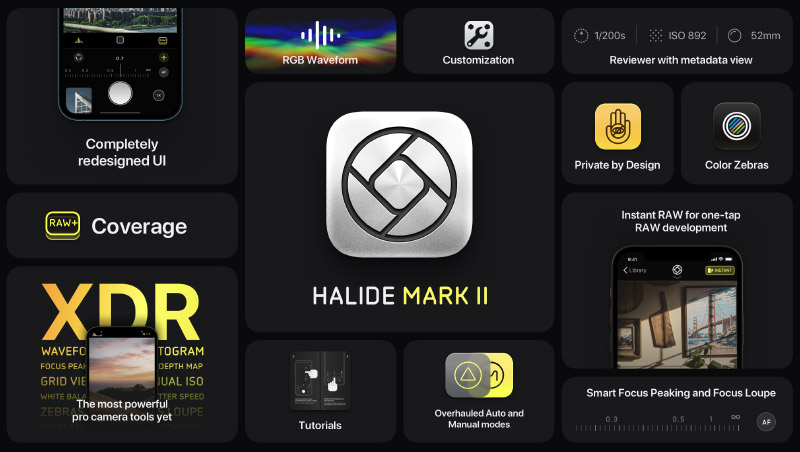 There's now a new version of Halide and it's called Halide Mark II. It has an all-new user interface, a new Instant Raw feature, and tons of other new features.

For the uninitiated, the first Halide is a camera app that you use in place of the iPhone's native camera app.

Why might you want to do that? The reason is that Halide gives you full control over shooting parameters like shutter speed, exposure, aperture, ISO, and more. In essence, it gives you the same manual controls as you'd get on a DSLR or mirrorless camera.

The big news with Halide Mark II is that it has an all-new user interface that has been designed to make all controls within easy reach. There's also a new typeface to spice up its looks.

For example, the manual exposure controls have been moved to the right for easier access. And one nifty new feature is the Focus Loupe, which appears when you are trying to focus manually and helps users focus on the right subject.

Then there's "Coverage", a new mode that takes two photos: one in RAW and another using the iPhone's imaging processing pipeline. This way, you get the benefits of having an instantly shareable photo that's been taken with Apple's excellent imaging processing, and you have a RAW image for more specific editing later.

This is a big one. Let's start digging into what's new. pic.twitter.com/kODuWSuJ7y

Speaking of RAW, there's also an "Instant RAW" feature that uses a 17-step process and the iPhone's built-in machine learning capabilities to generate a shareable JPEG. Think of it as applying Halide's own image processing pipeline to the image as opposed to Apple's.

Lux also said that Halide Mark II will support Apple's new ProRAW format when it comes out later this year.

Halide Mark II is available now. You can pay for it as a one-time purchase for S$44.98 or as a yearly subscription for S$14.98. Halide Mark I owners get to update for free. Finally, there's a free 7-day trial.

Our articles may contain affiliate links. If you buy through these links, we may earn a small commission.
Previous Story
Huawei has quietly unveiled a Mate 30E Pro
Next Story
Prism+ pushes out new 4k TV range with Android OS