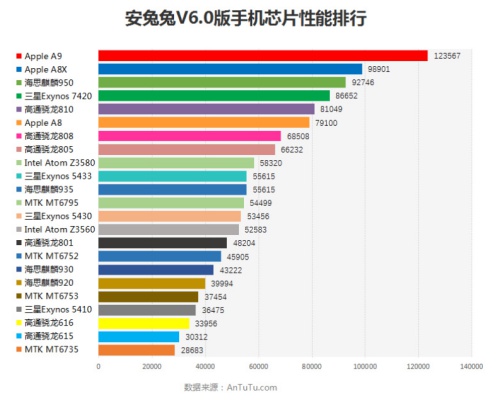 In late October, cross-platform benchmarking app AnTuTu announced the top 10 fastest Android smartphones based on its database records. The Samsung Exynos processors were revealed to be the top performing ones among Android devices in Q3 2015. What if AnTuTu included the benchmark scores of more mobile chipsets?

According to a screenshot of the AnTuTu benchmark, the Apple A9 chipset easily led the competition by a huge margin. The A9 chipset, manufactured by Samsung and TSMC, is powering the Apple iPhone 6s and 6s Plus. In second position is the A8X processor, which is housed in the Apple iPad Air 2. The recently announced Kirin 950 octa-core chipset, found in the Huawei Mate 8, is in third position.

The Samsung Exynos 7420 ranks fourth followed by the Qualcomm Snapdragon 810 and the Apple A8 chipset. Making it into the top 10 is Intel with its Atom Z3580, which can be found in the ASUS ZenFone 2 ZE551ML (4GB RAM) smartphone.

The current AnTuTu benchmark scores did not include newer chipsets such as the MediaTek Helio X20 and the Apple A9X chipset. The upcoming Samsung Exynos 8 Octa 8890 chipset is also a force to be reckoned with as a leaked screenshot shows that it achieved a score of 103,692 which could potentially put in the second position.