Guess which Apple iPad model is the most commonly used today

Guess which Apple iPad model is the most commonly used today 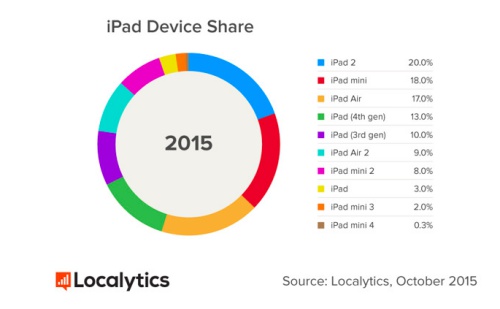 One year on, the iPad 2 is still the most commonly used Apple tablet today.

According to analytics firm Localytics, it collected data from over 50 million iPads and found that the iPad 2 has a 20% share of all iPads as of October 2015. The second most popular tablet goes to the first generation iPad mini at 18%, followed by the iPad Air in third position with 17% share. The recently announced iPad Mini 4 had a small share of 0.3%.

In addition, Localytics noticed that the first-month adoption of new iPads have been decreasing since 2012 and dropped significantly the following year. The analytics firm attributed this trend to longer lifecycles of tablets where consumers do not see the need to change them every year and would rather take advantage of the discounted prices of older models when new models are announced.

Localytics' study corroborates with IDC's report in July where the global tablet market shrunk 7% year over year in Q2 2015. For several quarters, Apple failed to reverse the declining sales of the iPads. Hopefully, the 12.9-inch Apple iPad Pro can help boost numbers in the next few quarters.

Our articles may contain affiliate links. If you buy through these links, we may earn a small commission.
Previous Story
Nearly 7 million Apple Watches estimated to have shipped since launch
Next Story
Apple could be launching the iPad Pro on 13th November