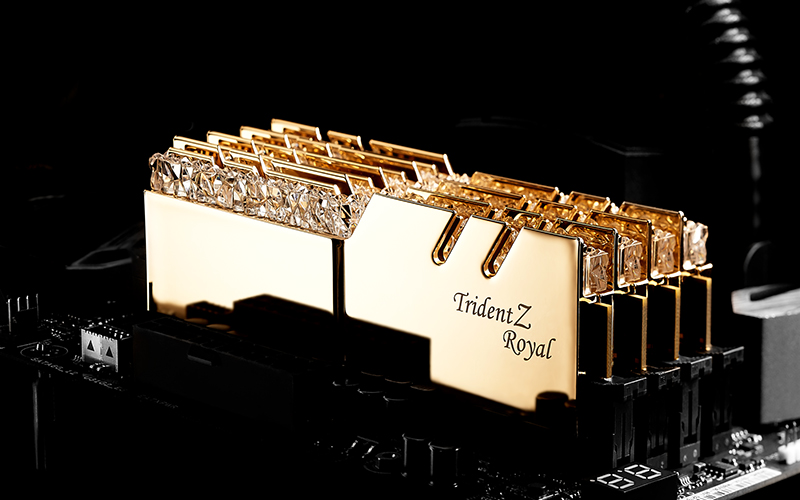 G.Skill’s new Trident Z Royal RGB memory is a perfect example of over-the-top largesse. If you thought regular RGB memory was too much, wait till you see G.Skill’s golden, crystal-lined RAM sticks.

The Trident Z Royal RGB will be available in DDR4 kits with speeds up to 4,600MHz and capacities up to 128GB. They use what G.Skill calls a crown jewel design and feature a polished aluminum heat spreader in either gold or silver.

The crystalline light bar at the top refracts the RGB LEDs embedded below, which will probably make for a one-of-a-kind light show. The Royal also uses G.Skill’s next-generation RGB module and is comprised of eight independent lighting zones that supposedly provide smoother color transitions. The PCB has been redesigned as well to accommodate the greater number of lighting zones.

On top of that, given how shiny the heatspreaders are, G.Skill has even included a microfiber cloth to let you wipe away fingerprints and dust. I’m not sure how many of you will actually open your chassis regularly to wipe your memory sticks, but it’s yet another example of how extravagant the Royal memory is.

But despite all the changes, these are still undoubtably Trident Z memory sticks, and they retain the series’ signature tri-fin design.

The Trident Z Royal memory kits will support Intel XMP 2.0 memory profiles for one-click overclocking. They will be available via G.Skill’s distribution partners in December. However, there's no word on price yet.

Previous Story
The Galaxy S10 and foldable phone could save Samsung's struggling mobile business
Next Story
PSA: If you downloaded any of these 13 games from the Google Play store, your device is infected with malware