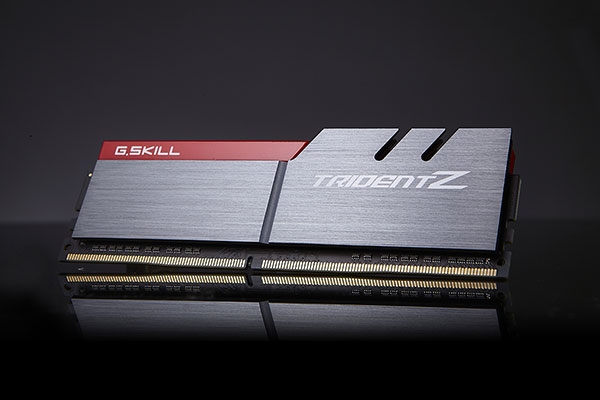 The high-end Trident Z DDR4 kits feature a single-piece design that allows direct heat dissipation from the heatspreader to the cooling fin. The design is striking, with a brushed black metallic look and a bold red border running along the top of each module. 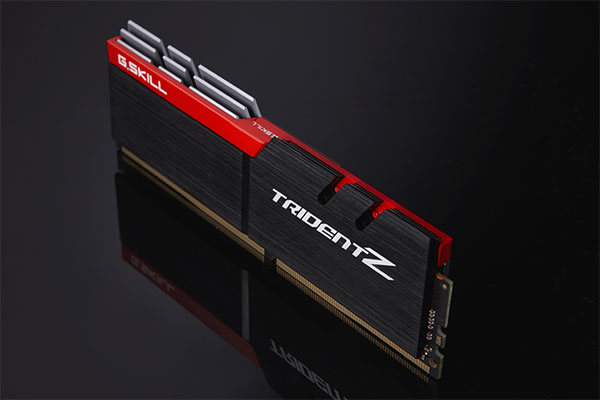 The new memory modules will support Intel XMP 2.0 for memory overclocking, with kits that range from DDR4-2800MHz to an impressive DDR4-4000MHz. All the kits feature hand-screened Samsung IC memory chips, and the top-end 4000MHz kit has been validated on ASRock’s Z170 OC Formula motherboard.

It's worth noting that these are the first retail memory kits to hit 4000MHz, according to G.Skill. The company has a record of pushing the limits in memory speeds. In May, it released a 3666MHz DDR4 Ripjaws 4 memory kit for Intel's X99 platform, which effectively topped a similar 3333MHz kit released last September.

The more mainstream Ripjaws series of memory goes up one number to Ripjaws V, complete with a new heatspreader design. The design is clearly targeted at gamers, with a slopping top and aggressive grooves and notches all around. It will even come in five colors – Blazing Red, Steel Blue, Radiant Silver, Gunmetal Gray, and Classic Black – so users should have no problem finding the right kit to match their system’s color scheme. 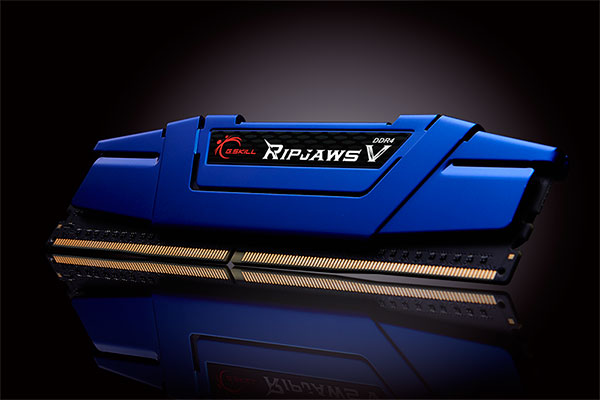 The Ripjaws V DDR4 memory kits will be available in a range of configurations and capacities, comprising 4GB, 8GB, and 16GB modules and with memory clocks ranging from 2133MHz to a high of 3733MHz. They are all of course compatible with Intel XMP 2.0, so installation and overclocking should be a breeze in the BIOS.

You can check out the timings for the higher clocked modules in both the Trident Z and Ripjaws V series here: 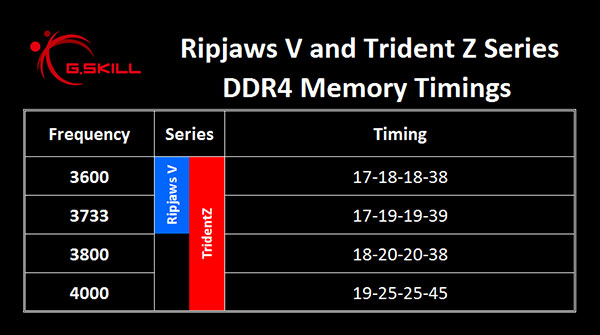 G.Skill has also released a table showing all the available memory configurations and their voltages, which you can view below: 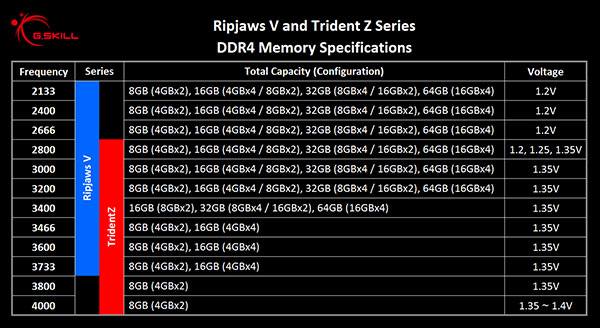 That's really quite a lot of variety to choose from, and users should easily find a kit to suit their needs and preferences.

We don’t yet have information on pricing or availability, but you can be sure that the high-end 4000MHz Trident Z kit will cost you quite dearly.

Join HWZ's Telegram channel here and catch all the latest tech news!
Our articles may contain affiliate links. If you buy through these links, we may earn a small commission.
Previous Story
Android security flaw puts your phone into a completely unresponsive state
Next Story
Google's Translate app can now translate printed text in real-time in 27 languages