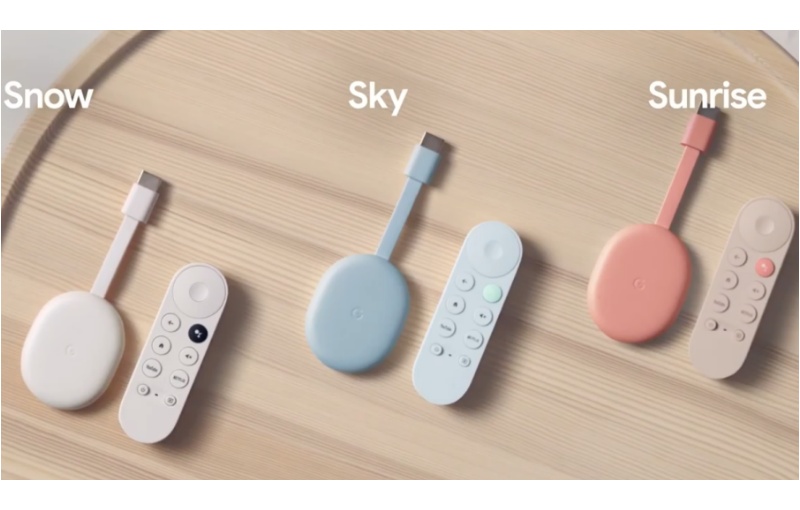 Google has just announced the launch of a new Chromecast and new remote and software to help it compete with the likes of Apple TV.

Available in three colours that Google calls, “Snow, Sunrise, and Sky” and costing US$49, the device is available now in the United States. It is also available for pre-order in countries like Australia, Canada, France, Germany, Ireland, Italy, Spain, and the United Kingdom where it will be available for purchase on October 15.

It still plugs into your TVs HDMI port and now supports 4K HDR at up to 60 frames per second, Dolby Vision, and HDMI pass-through of Dolby audio content.

Apple TV was recently updated to increase functionality and give it the ability to support YouTube 4K content. The new remote is relatively small and looks like a comfortable fit into the hand. It can even replace your regular TV remote allowing you to use a single remote to control everything thanks to its programmable TV controls for power, volume and input. It has dedicated buttons for YouTube and Netflix, to give you instant access to the content you love. There is even a Google Assistant button that can help you find something to watch, answer everyday questions like “how's the weather?”, or play YouTube Music all with just your voice.

One TV box for all the content you need?

With Google TV, you have access to more than 6,500 apps and the ability to browse hundreds of thousands of movies and TV shows sorted and optimised for what you like, across your favourite apps, like Disney+, HBO Max, Netflix, Peacock1, france.tv, Rakuten Viki and YouTube, among others. Stadia support is coming in the first half of 2021.

Join HWZ's Telegram channel here and catch all the latest tech news!
Our articles may contain affiliate links. If you buy through these links, we may earn a small commission.
Previous Story
Pixel 5 and Pixel 4a 5G support HDR playback on Netflix
Next Story
CD Projekt Red has reportedly moved to a 6-day work week ahead of Cyberpunk 2077's launch