Google's Nexus 9 Tablet to be Made by HTC?

Google's Nexus 9 Tablet to be Made by HTC? 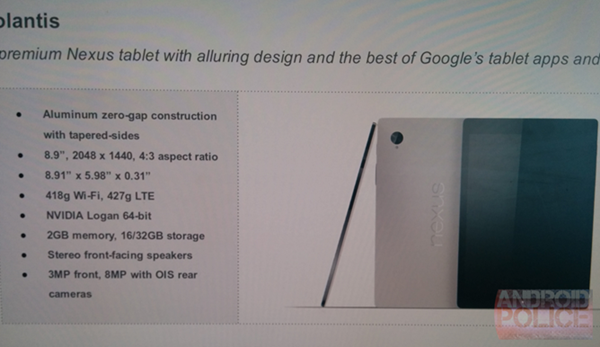 Google currently has a 7 and 10-inch tablet, but lacks an 8-inch offering to compete with the likes of the Apple iPad Mini and Samsung's tablets. That might change in the coming months with an alleged Nexus 9 tablet.

According to Android Police, information provided by a source indicated that Google is working with HTC to offer an 8.9-inch Nexus tablet. Known internally as the Nexus 9, the tablet will run on the NVIDIA Tegra K1 processor, 2GB RAM and comes in an aluminum zero-gap construction with tapered sides.

If the design description doesn't ring a bell, let us help refresh your memory that it is the same language used to promote the HTC One in 2013. Other specs include a 7.9mm thin chassis, an 8-megapixel camera with optical image stabilization and two storage options (16 and 32GB).

Android Police also revealed the possible price points for the Nexus 9; the 16GB Wi-Fi model will retail at US$399 while the 32GB model will be priced at US$499. The LTE model will be more expensive in the US$600 range. Google is expected to launch the Nexus 9 in Q4 2014 together with the release of the next Android version.

HTC is no stranger to the Nexus program; it made the first Nexus smartphone in January 2010. Since then, LG and Samsung have been at the helm manufacturing the Nexus smartphones. The Nexus tablet program was dominated by ASUS and Samsung, and it seems that the time is ripe for HTC to step in.

However, there are rumors that Google is planning to drop the Nexus brand for a premium Android "Silver" program. The first devices from the "Silver" program are expected to be released in 2015. Perhaps the US$100 Nexus phone with MediaTek chipset and the Nexus 9 tablet are the last products from the Nexus lineup before Google replaces it.

Join HWZ's Telegram channel here and catch all the latest tech news!
Our articles may contain affiliate links. If you buy through these links, we may earn a small commission.
Previous Story
Biostar TB85 is Ready for Work, Play, or Bitcoin Mining
Next Story
Lego Fusion Lets You Build Virtual Towns with Real Lego Bricks