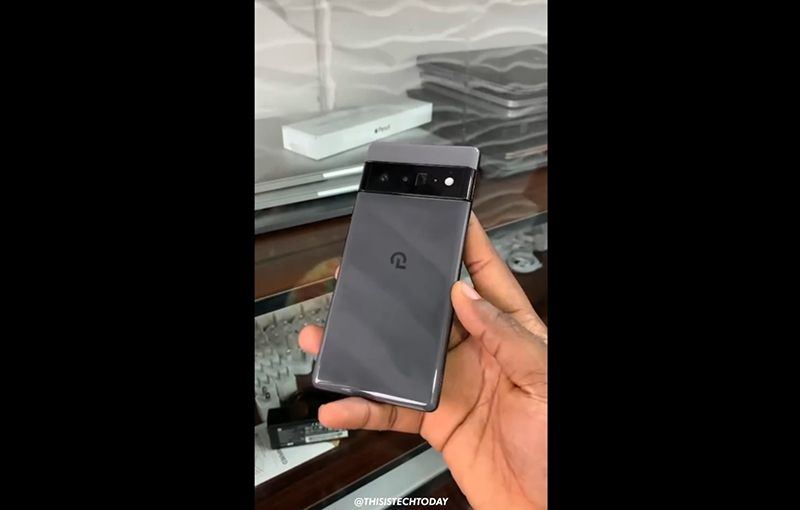 Up until yesterday, the much-rumoured Google Pixel 6 was only seen in leaked videos and images, including Google’s very own YouTube advertisements about the new Pixel devices. Now, there’s a leaked Pixel 6 video - allegedly with a production test unit that’s not for sale.

This morning, tech reviewer This Is Tech Today (Twitter, YouTube) got hold of a short video clip showcasing a Pixel 6 Pro out of the box. The clip showed a handler briefly flipping the Pixel 6 Pro in hand, showing off the device’s appearance.

I think this may be the first hands on video leak of a Google Pixel 6 Pro.

FYI: The logo would indicate that this is likely an early production test unit, so that means there may be some differences between what you see here and the actual production device. #teampixel pic.twitter.com/4QSvdktqA7

The phone seemed similar to the devices touted in Google’s ad reveal. On top of a glossy finish, curved glass on the front, and dual-tone ‘stripe’ across its back, the Pixel 6 Pro resembled older Samsung and OnePlus phones with overhanging display edges.

The reviewer added that the phone shown is an early production test unit, so this prototype is not final. He later made a video that included more leaked images of the Pixel 6 Pro devices.

Join HWZ's Telegram channel here and catch all the latest tech news!
Our articles may contain affiliate links. If you buy through these links, we may earn a small commission.
Previous Story
Netflix's League of Legends series Arcane reveals cast and character posters
Next Story
Dynamic head tracking takes Spatial Audio to the next level in Apple Music