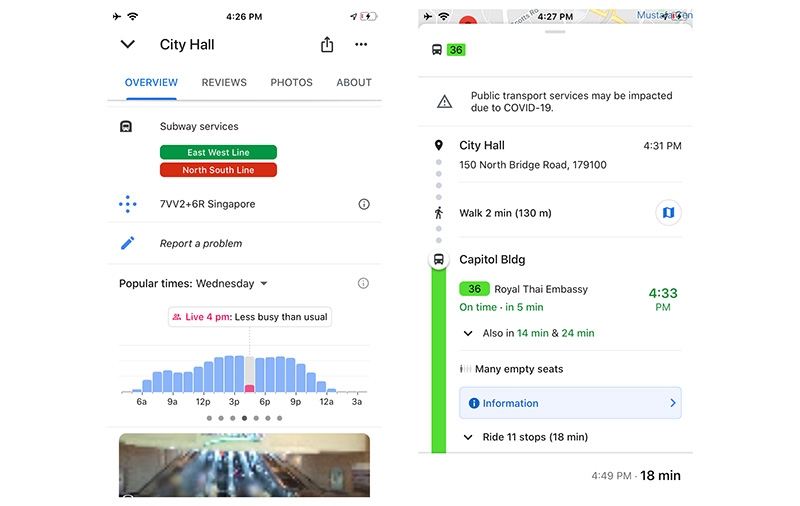 Google has announced that its latest Maps release now includes important transit information to help users navigate to work and elsewhere safely during this Covid-19 period.

For instance, the app is now able to surface relevant alerts from transit agencies in Argentina, Australia, Belgium, Brazil, Colombia, France, India, Mexico, Netherlands, Spain, Thailand, the United Kingdom and the US. Users will see alerts about transit service disruptions as well as government mandates such as compulsory mask use on public transportation. Driving alerts about Covid-19 checkpoints and route restrictions are also available for users crossing borders in Canada, Mexico and the US.

Starting this week, Google Maps will also be displaying alerts for medical facilities in Indonesia, Israel, the Philippines, South Korea and the US. The alerts are meant to remind users the facilities’ guidelines and eligibility requirements so that users know what to prepare before they make their way there.

Also starting today is the ability to see the times when a transit station is historically more or less busy ⁠— useful for planning for upcoming trips. Users can also look at live data to see how busy a station is right now. Google says these capabilities are powered by aggregated and anonymised data from users who have opted in to Google Location History; and the info only appears when there’s enough data to meet privacy thresholds.

A gradual rollout that’s likely to take several weeks, this busyness data feature is already available here. For instance, when I searched for City Hall MRT Station just minutes ago, Maps was able to tell me that the station was less busy than usual. I could also click on other times to see the predictions. And while Singapore isn’t mentioned in the press release, I could see basic alerts reminding me to wear a face mask and practise safe distancing. I could also see seating situations on buses and standing room predictions on trains but those aren’t new because transit crowdedness predictions were introduced last June.