Google has created an AI that makes other AIs

Google has created an AI that makes other AIs

At an event at Google's offices in Tokyo today, Google Brain Senior Fellow, Jeff Dean, spoke about the future of AI and machine learning for Google. One of the areas touched upon was Google's AutoML project, which was revealed earlier this year.

AutoML is an AI Google has created to help it create other AIs. In Dean's words, "What if we could automate the process of machine learning?"

Currently, most AIs are built around neural networks that simulate the way the human brain works in order to learn. Neural networks can be trained to recognize patterns in information, such as speech, text, and visual images. But to train them requires large data sets and human input to make sure the AI is learning correctly.

However, Dean revealed today that not only has AutoML successfully created its own neural network AI without any human input, but it's also vastly more powerful and efficient than the top performing human-designed systems.

Dean shared a slide showing a number of neural networks built for image recognition - one of the most common uses for AI today. AutoML's image recognition AI managed an incredible 82 percent accuracy, higher than any human-designed AI. 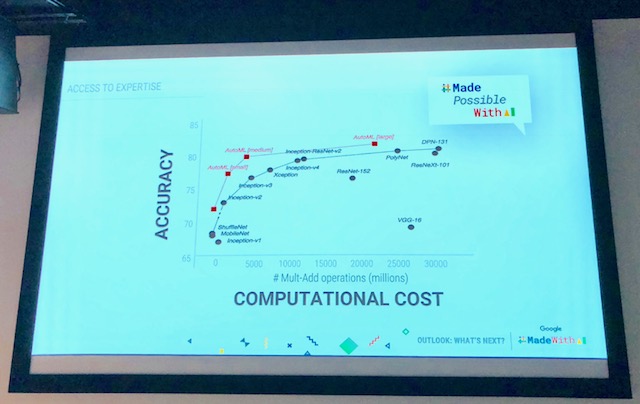 This achievement marks the next big step for AI, in which development is automated as the software becomes too complex for humans to understand. Of course, it could also be the next big step towards the robopocalypse.

Join HWZ's Telegram channel here and catch all the latest tech news!
Our articles may contain affiliate links. If you buy through these links, we may earn a small commission.
Previous Story
Samsung releases the Galaxy S8 in a hot new red color
Next Story
WD Black PCIe SSDs for enthusiasts have landed; competition for Samsung? (Updated!)