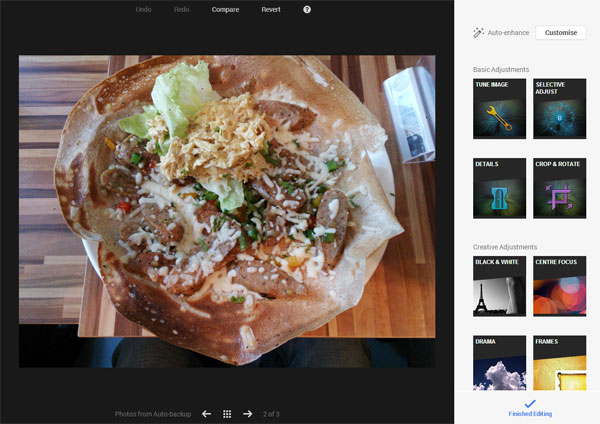 Google has just updated Google+ Photos with some new photo editing tools powered by Snapseed, which was acquired by Google in September 2012. They can be found when you open up any photo in Google+, and click on the "Edit" option above the photo.

While the tools are fairly powerful, they're not overly complicated to use, so almost anyone will be able to get used to them in a matter of minutes. Users are able to do basic edits like crop and rotate, or creative edits like adding filters and frames, simply by using their mouse pointers to drag on the editing sliders.

If you're unhappy with the edited results, there's always the option to revert to the original version of your photo.

According to a Google+ post by Google employee, Josh Haftel, the new tools should be available to users now. If they aren't they should be arriving pretty soon. Unfortunately, the full suite of tools are only available on Chrome browsers. Non-Chrome browsers are only able to crop and rotate photos for now.

Snapseed's photo editing tools are also available on the Android and iOS Google+ apps. They offer less controls, but give users the ability to make quick edits while on the go.

Join HWZ's Telegram channel here and catch all the latest tech news!
Our articles may contain affiliate links. If you buy through these links, we may earn a small commission.
Previous Story
Yahoo CEO Says Monthly Active Users Up 20%, Over 350 Million Users on Mobile
Next Story
Rumor: NVIDIA Working on the GeForce GTX 750 Ti GPU