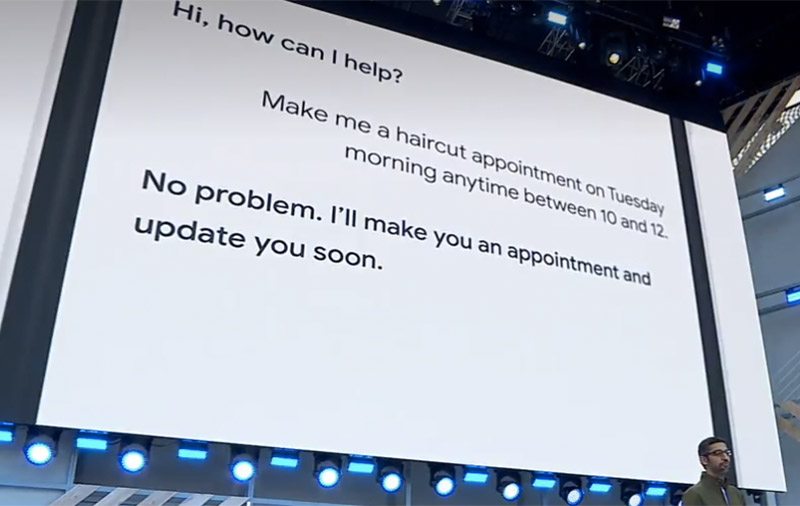 As Google brings Google Assistant to more devices and form factors, it’s no surprise that the virtual assistant got a good amount of on-stage time at the I/O conference earlier today. And the incoming new features are all about making it more naturally conversational, visually assistive, and helpful in getting things done.

The last point about getting things done is perhaps best illustrated by today’s demo of a new technology called Google Duplex. In broad strokes, a Duplex-powered Assistant on a compatible phone or smart speaker is able to call businesses on your behalf and understand “complex sentences, fast speech, and long remarks” so as to hold a conversation. It is essentially an AI system dedicated to accomplishing real-world tasks over the phone.

In Google’s demo, the Assistant was seen making restaurant reservations and scheduling hair salon appointments; and the other party, a real human, had no idea that he or she was talking to a virtual entity.

You can see that Assistant was very convincing not just because it was able to understand context and follow through on a conversation, but also because it went the extra mile to imitate human behaviors, such as saying “Mm-hmm...” or pausing in mid-sentence. It’s really cool and scary in equal parts.

Additionally, Google told us in a separate media session that it's still experimenting with Duplex and hasn't decided on the eventual product, so implementation details like whether Assistant would let the other party know he or she is talking to a virtual assistant aren't available at the moment. The reason behind the I/O announcement is Google wants to be open and let the world know it's developing such a feature.

Google will activate Duplex for Assistant for U.S. users to test this summer. To find out even more behind the wizardry that makes it all possible, check out this Google AI Blog.

Previous Story
iPhone X Plus rumored to be same size as the iPhone 8 Plus
Next Story
Curving screens, transparent OLEDs and more in LG’s future of digital signage