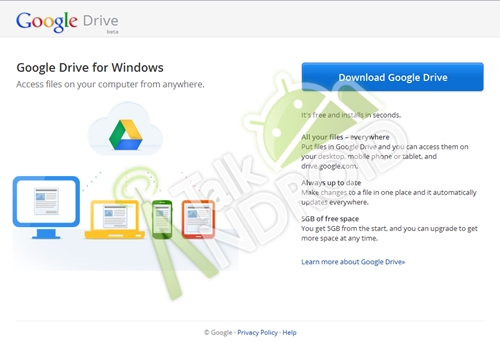 Google will soon join the likes of Apple's iCloud, DropBox, Box and Microsoft's SkyDrive with its own cloud storage service, Drive.

According to TalkAndroid, the leaked screenshot obtained by its source pointed to a free 5GB storage space for users. In addition, the source mentioned that Google is likely to be launching the service in the third week of April.

Android vendors are partnering with third party cloud storage services to boost the appeal of their mobile devices. HTC recently announced that its One series of smartphones will come with 25GB of free Dropbox storage for two years. Sony is currently offering 50GB of free Box storage space for every Xperia owner and the promotion is valid till 31st December 2012. Microsoft is also offering 25GB of free SkyDrive storage space for Windows Phone users.

Join HWZ's Telegram channel here and catch all the latest tech news!
Our articles may contain affiliate links. If you buy through these links, we may earn a small commission.
Previous Story
Facebook Timeline For All
Next Story
Google to Go It Alone for Nexus Tablet?