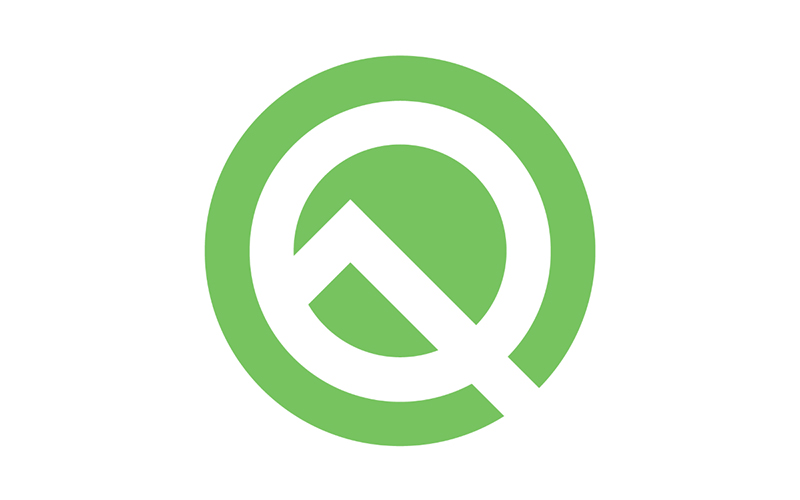 Google today revealed more of what you can expect from Android Q, the next version of its mobile operating system. While it's still a mystery as to what sweet confectionary Q will stand for, Google said that Android Q will have security and privacy as a central focus, in addition to new accessibility features and a long-awaited Dark Theme.

One of the most obvious additions is probably the system-wide Dark Theme that can be accessed via a toggle in the Quick Settings panel. It'll also automatically activate when you turn on battery saver mode.

While individual OEMs, such as Samsung, have previously implemented their own version of OS level dark mode, and a few individual apps have experimented such modes as well, prior to Q, Android does not support dark mode natively, and without native support, developers are not able to implement a dark theme easily without unevenness in end-user experience. 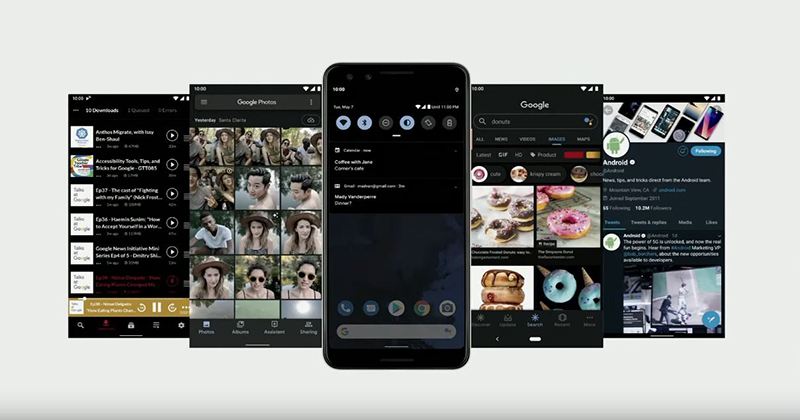 This is the first time Android has offered an official dark mode that applies across things like the app drawer, settings menu, and notifications tray. On top of that, Dark Theme creates an identifier in Android that can be recognized by third-party apps. This means that developers could make their apps automatically activate their own dark themes without you having to root around in each app's settings. This should translate into better user experience and particularly for OLED-based phones, an increase in battery life can be expected since black pixels consume very low energy compared to lit pixels. 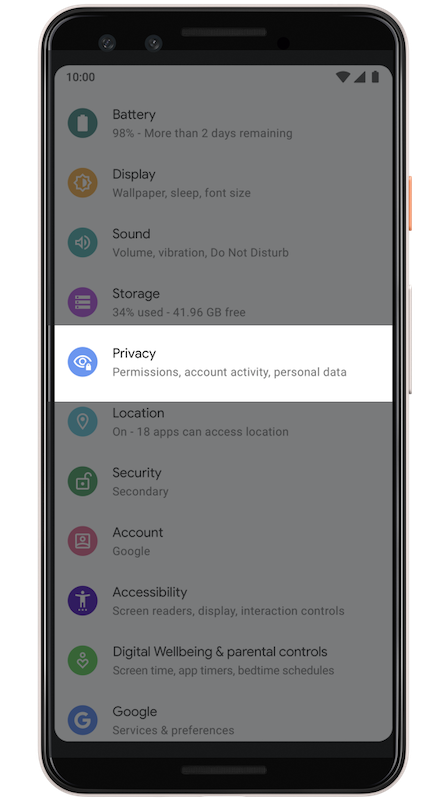 Under the hood, Google is also adding 50 new privacy and security settings in Android Q, plus all privacy controls have now been consolidated prominently as a first level menu item under Settings.

You also get more granular control over which apps can use your information and when. For example, there are new location services settings that allow you to limit location tracking only to when an app is running, so they aren't off building a map of your location history. In addition, you'll get a notification so you can see when apps are using your location in the background.

Other settings include limits to prevent apps from accessing media on your phone and device information such as its IMEI and serial number. Google also wanted to make these settings easier for you to discover and access, so it's bringing them to the forefront in the settings menu as well. 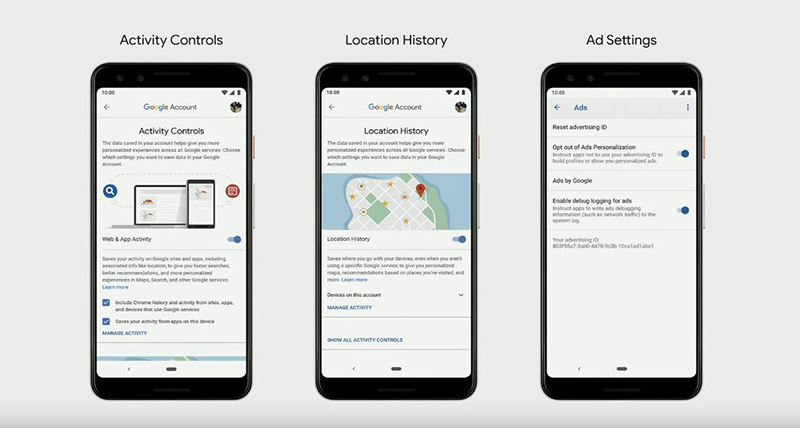 And then there's the issue of security. Android continues to be dogged by issues of slow updates to the vast majority of non-Pixel devices, but Google has taken steps to mitigate the issue. This started with Project Treble in 2017's Android Oreo, and the latest initiative is called Project Mainline. Basically, Google wants to make it possible for Android Q devices to receive security updates via the Play Store, which should allow crucial security updates and patches to be pushed out to devices much more quickly.

There's currently a long process between Google releasing an update and a manufacturer like Samsung pushing that update, so Project Mainline should help reduce wait times.

This is possible because Google has begun to modularize Android and break it down into individual parts. These different OS modules can then be updated directly over the air, and it has the added benefit of reducing the likelihood of a certain update breaking something in another part of the OS. For now, there are 12 different modules that Google can update, including things like media components. This approach also makes it easier and faster to roll out smaller updates to patch bugs or flaws in specific OS modules instead of having to release a larger fix.

Another interesting feature is something called Live Caption. This is exactly what it sounds like, and Android Q devices will be able to leverage Google's machine-learning algorithms to generation real-time captions for any video. This is done by simply pressing the volume button and then the "live caption" button that pops up on the onscreen volume slider. You'll be able to adjust the captions to suit your preferences, moving them around the screen or changing their size. All this is also done locally on your device, so there's no need for a network connection.

Google debuted a prototype of Live Transcribe this year to showcase its capability to transcribe speech. Live Caption further extends this idea by overlaying text over any video stream live. What’s more amazing is that such captioning is done on-device, i.e. no raw audio is being sent to Google; it works even with Airplane mode on. Captioning is almost instantaneous, save for a slight lag for transcription correction.

Live Caption is part of Google's new suite of accessibility features to help consumers who are deaf, hard of hearing, or have difficulty speaking. Even for those who don't typically need accessibility features, Live Caption has a great everday use-case to improve communications between all parties of a typical video conference call. Just turn Live Caption on, and the user can read the “subtitles” of what the other party is conveying with less second-guessing of the finer details.

The company also announced a tool called Live Relay to help users respond to phone calls by typing messages on their keyboard or using Smart Reply messages. Then there's Project Euphonia, which aims to improve voice recognition for users with ALS or other speech impairments, thus making it easier for them to use their devices.

Google is also expanding Smart Reply beyond its own messaging app and Gmail.

“Let’s meet at Reflections at Bukit Chandu at 12 noon tomorrow”. Perhaps you have received similar types of messages from your friend. Normally, you will need to spend that few seconds to send “Alright see you!” (or “nope”) to your friend, and then following from there, you go to your calendar, create appointment entry, and then later open Maps, copy paste “Reflections at Bukit Chandu”, just to find out where it is. Much tedious. 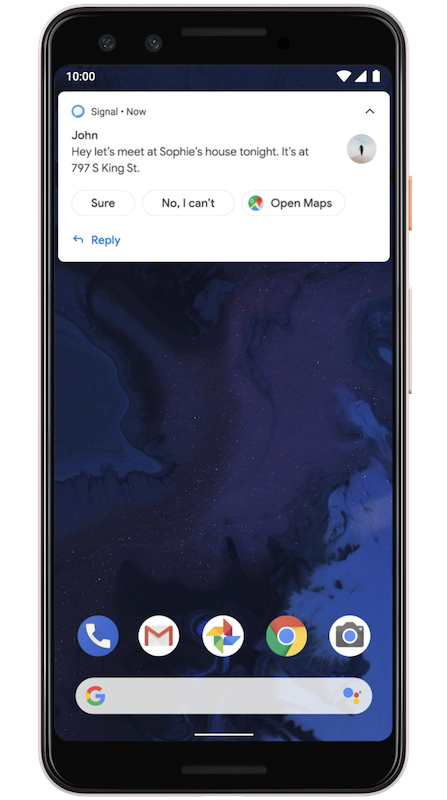 Android Q will use its on-device machine learning capabilities to let any messaging app suggest replies in the notification area. Smart Reply can also suggest actions based on your notifications. It will also suggest the next possible course of action, such as setting a calendar entry or checking where the meetup is, and have all information pre-filled. For example, if someone texts you an address, it'll surface the option to open it in Google Maps.

Digital Wellbeing for you and your kids

Elsewhere, there are smaller quality-of-life updates, such as a new Focus Mode to block alerts from the most distracting apps and changes to the gesture-based navigation system introduced on Android 9.0 Pie. Google is building a new gesture navigation system for Android Q. In fact, it's replacing the back button with a swipe from either edge of the phone, swipe up from bottom for Home, swipe up from the bottom and hold for recent tasks.

If you want to give Android Q a spin, the latest beta is available for all Pixel phones, in addition to 15 other phones from manufacturers like ASUS, LG, Nokia, OnePlus, Vivo, and Xiaomi. This is the largest selection of devices yet to gain access to a beta version of Android, which bodes well for Android Q adoption when it finally rolls out.