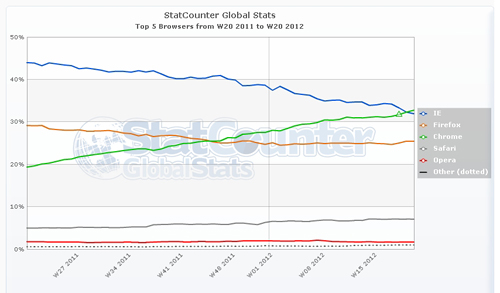 It has finally happened. Internet Explorer's hegemony is broken. And it is not Mozilla's Firefox that dethroned the Microsoft browser but Google Chrome, which can now claim to be the most used browser across the world. You can see from the graph above that the search giant's browser (denoted in green) has been steadily gobbling up market share since its inception.

However, with Windows 8 rumored to be released in October 2012 and the Metro interface becoming available for all, Internet Explorer might just be able to hit back. The questions is will IE reclaim the top spot after the arrival of Microsoft's unifying OS?

Source: Stat Counter via The Next Web and Techland