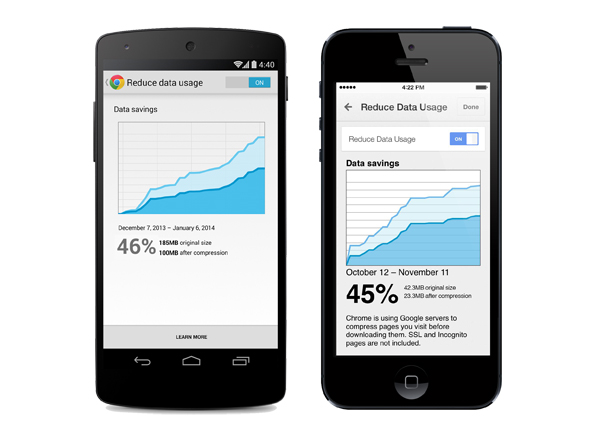 Google recently announced on the Chrome blog, a few key improvements made to the Chrome browser for mobile devices. The most significant feature in this update is Chrome's data compression and bandwidth management, which Google claims is able to reduce data usage by up to 50% while browsing the web with Chrome for Android or iOS. To enable it, go into Chrome settings, under Bandwidth management, select "reduce data usage", and turn the feature on.

According to TechCrunch, the data compression works by sending requested data through a Google proxy server which contains PageSpeed libraries that compress and optimize the data before sending them on to your device. TechCrunch also warns readers to be aware that all your HTTP traffic will have to through Google's servers in order for the feature to work. Take note however, that traffic in incognito mode and from HTTPS sources will not be able to use this compression feature.

Turning on the data compression feature (which routes all traffic through Google) also turns on the Safe Browsing feature at the same time. This feature can also be found on the desktop version of Chrome, and basically works by protecting users from malicious websites (phishing, drive-by malware, and harmful downloads).

In Chrome for iOS, Google also added the Google Translate feature that translates webpages in your iPad or iPhone with just a click of a button. To translate, simply look for the translation bar, and hit the translate button to translate webpages into your native language or a language of your choice.

Chrome for Android also received a feature that allows you to pin shortcuts to webpages right onto the homescreen. To launch the site in Chrome for Mobile, just tap on the icon saved on the device's homescreen. Certain Chrome for Mobile optimized websites can also open up in full screen mode, and be recognised by the Android app switcher as a separate app from Android.

The updated Chrome for Mobile will be rolled out to users in the next few days, while new users will be able to download Chrome for their devices via the Google Play Store, or the Apple App Store.

Join HWZ's Telegram channel here and catch all the latest tech news!
Our articles may contain affiliate links. If you buy through these links, we may earn a small commission.
Previous Story
Steam Machines Benched and 3DMark-ed
Next Story
HP Returns to the Mobile Market with Two Voice Tablets, Feb Launch in India