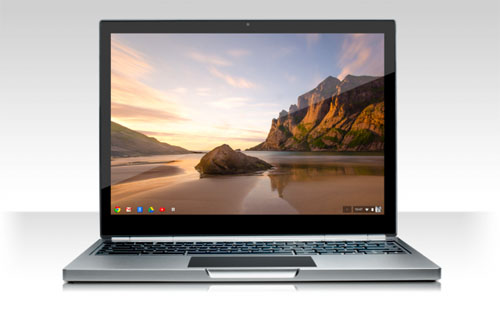 The Google Chromebooks were supposed to be cheap, affordable notebook running Google's OS and providing a connection to the cloud. That philosophy has obviously changed to a certain degree seeing that Google has just announced the Chromebook Pixel, which goes against the precedent set by previous Chromebook iterations.

Google had been rumored to be working on the Pixel and now it has confirmed the product, which will be the first notebook designed by the tech giants themselves. The most interesting feature of the Pixel is meant to be its 2560 x 1700 resolution screen which will feature an aspect ratio of 3:2. The display is meant to be optimized for web content. Seeing that the screen will be almost as tall as it is wide, it is intended to help with the vertical flow of websites. In addition, the screen will also provide touchscreen capabilities.

The aluminum-bodied laptop is powered by a 1.8GHz Intel Core i5 processor with integrated graphics, 4 GB of RAM and 32 GB of flash storage for the Wi-Fi only model. An LTE enabled model has also been announced but will be available in the US only for now. Google themselves have stated that the Chomebook Pixel will be a direct competitor to Apple's Macbook Pro.

The Chromebook Pixel will be priced at US$1299, which is quite a steep asking price. But Google believes there is a market for such high end product which it obviously means to tap in to with the Pixel. With the move to open their own retail stores, Motorola smartphones in the pipeline and now the Pixel, Google looks like it is heading towards expanding its reach substantially.

Source: Arstechnica and The Verge

Join HWZ's Telegram channel here and catch all the latest tech news!
Our articles may contain affiliate links. If you buy through these links, we may earn a small commission.
Previous Story
Office 2013 SLA States Software as Non-Transferable (Update: Microsoft Clarifies)
Next Story
ZTE First to Announce Super Phones Powered by Tegra 4