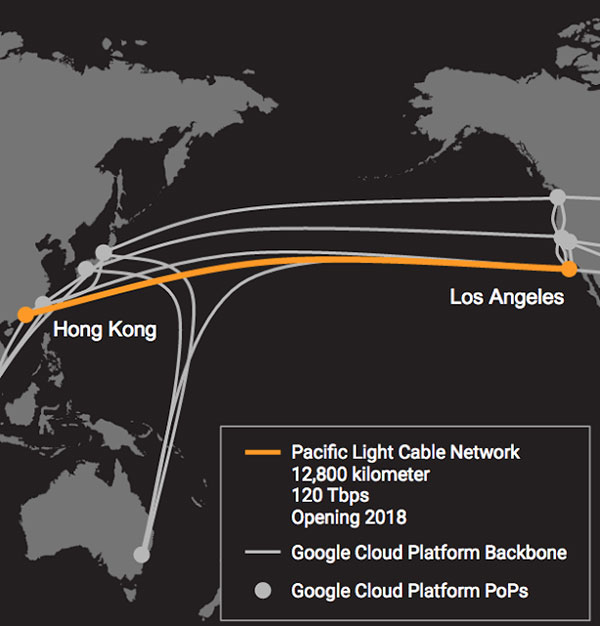 Google and Facebook have teamed up to build a direct connection to Asia. In a recent announcement, both technology giants said they would be working with the Pacific Light Data Communications Company and TE SubCom to build the first direct undersea connection between Los Angeles and Hong Kong.

Slated for completion in 2018, the Pacific Light Cable Network (PLCN), as it is called, will span a whopping 12,800km and ferry up to 120 terabits of data per second between both cities.

This data capacity actually outstrips that of FASTER, the previous record holder and another Google-backed cable system. In real world terms, this means that the PLCN will add enough capacity for 80 million people in Hong Kong to have an HD video call with someone in Los Angeles concurrently.

Other services that will benefit include users of the Google Cloud Platform, such as Spotify and iCloud. Once the PLCN is completed, Google’s cloud will have the largest network backbone of any public cloud service provider. Furthermore, users of Google’s G Suite apps – which includes things like Calendar, Drive, Gmail, Docs, and Sheets – will experience benefits like lower latency, better security, and more bandwidth.

That said, the larger implication is that Google and Facebook are looking to expand their foothold in Asia. Both these companies’ businesses are centered around getting as many people online as possible, and the new and faster connection could facilitate growth in Asia’s many developing countries.

Join HWZ's Telegram channel here and catch all the latest tech news!
Our articles may contain affiliate links. If you buy through these links, we may earn a small commission.
Previous Story
The Apple Watch has the most accurate pulse reader among wearables
Next Story
The 360Fly HD and 360Fly 4K 360° cameras are now available in Singapore