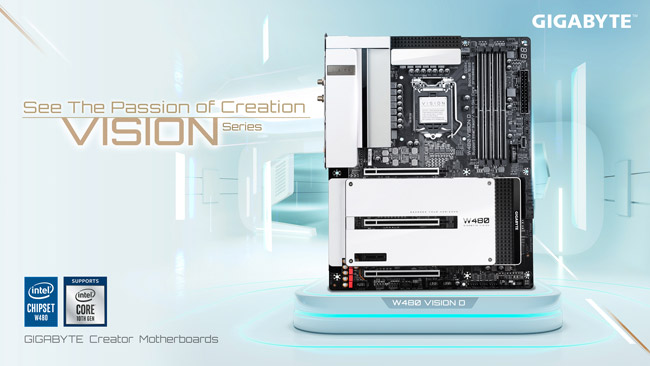 Gigabyte has announced the new W480 Vision Series, a content creator and workstation motherboard series based on Intel’s W480 chipset. These new motherboards are designed specifically for the new Intel Xeon W and 10th Gen Core vPro processors that were announced earlier today.

Each W480 Vision motherboard model will have special (and different) functions that serves the needs of different users. For example, the W480 Vision D (pictured above) Thunderbolt 3 feature provides two sets of USB Type-C interfaces, providing up to 40Gb/s channels per channel – allowing for the transferring of large files in a short time. Through daisy chain technology, a single port can connect six devices too.

For many workstation users, network speed and stability are critical. The W480 Vision series of motherboards come with dual Intel server-level network designs, providing both 2.5 GbE and 1 GbE network function, and supporting vPro technology. In addition, the W480 Vision D features an Intel WiFi 6 802.11ax network adapter and high-gain smart antenna to deliver up to 2.4Gbps speed over the air.

The full specifications can be found over at Gigabyte’s website. Pricing and availability will be announced separately.

Join HWZ's Telegram channel here and catch all the latest tech news!
Our articles may contain affiliate links. If you buy through these links, we may earn a small commission.
Previous Story
A 5G variant of the Galaxy Z Flip could be coming later this year
Next Story
NVIDIA's new Ampere A100, 54-billion transistor GPU will revolutionize data center design