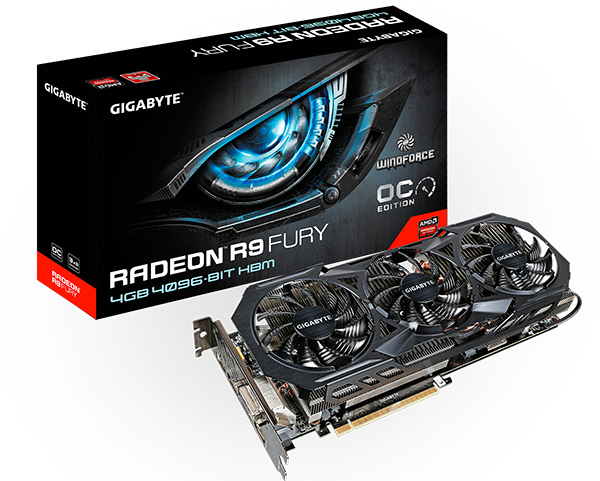 Gigabyte has announced the R9 Fury WindForce, the first Fury card from the company to feature a custom PCB. When the Radeon R9 Fury was first launched back in July, not all OEM partners had the freedom to tweak the reference PCB for their own products. However, with the release of the Radeon R9 Nano, AMD has apparently allowed more of its board partners to build cards with Fiji GPUs, and the latest R9 Fury from Gigabyte is the first such instance of what will likely be a greater selection of custom Fiji-based cards.

Like the ASUS Strix Radeon R9 Fury, the Gigabyte card is a triple-fan affair with a custom WindForce cooler. According to Gigabyte, pure copper heatpipes are used in order to improve heat dissipation.

It also comes with a metal backplate, and we wouldn’t expect anything less from a high-end card like this one.

We don’t have the exact dimensions of the card, but it looks like it could be around 30cm long given that it is a triple-fan card. The PCB is also notably longer than that on the Sapphire Tri-X Radeon R9 Fury, and the extra space could mean that Gigabyte has managed to include beefed-up VRM or power delivery components.

This is one advantage of allowing manufacturers to design their own custom PCBs as the overclocking capabilities of the card are often improved as a result.

The card comes with an out-of-the-box core clock of 1,010MHz, a slight bump over the 1,000MHz specified by AMD. It also comes with the expected 4GB of High Bandwidth Memory (HBM) and a 4,096-bit memory bus.

Two eight-pin power connectors are required to power the card, and you should have at least a 600 watt power supply to go with it.

Join HWZ's Telegram channel here and catch all the latest tech news!
Our articles may contain affiliate links. If you buy through these links, we may earn a small commission.
Previous Story
A fully decked Surface Book costs as much as a fully decked 15-inch MacBook Pro
Next Story
Intel has a team of more than 1,000 people working on chips for the Apple iPhone