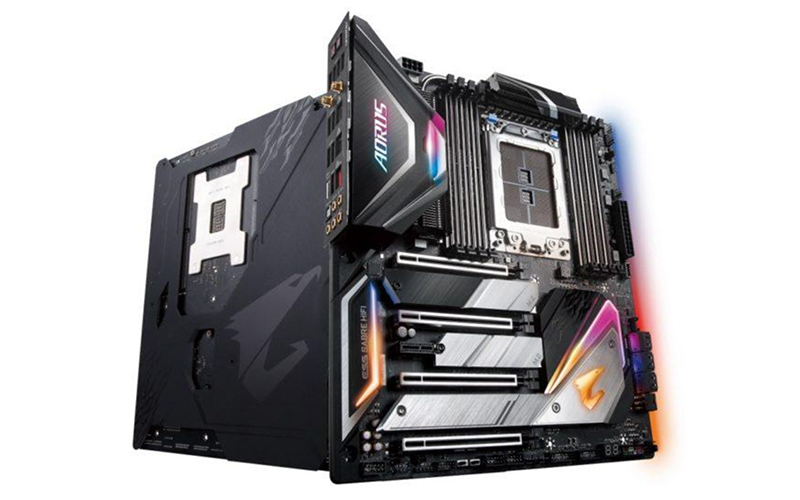 This is a board built for overclocking, and it features a 10+3-phase power design with direct contact heat pipes between the two main heat sinks for better cooling. The main finned heatsink is also constructed from copper instead of aluminum, which Gigabyte says provides better thermal performance because of the increased area available for heat dissipation.

In addition, the board comes with two 30mm fans located under the I/O shield. These will automatically activate during heavy workloads and provide additional cooling to the VRM components.

On top of that, Gigabyte used what it calls a NanoCarbon base plate, which it says helps reduce the temperature of components mounted on the back of the PCB.

The X399 chipset provides 64 PCIe 3.0 lanes, of which 48 are dedicated to graphics performance. This means that the Aorus Xtreme will take up to 4-way AMD CrossFireX or NVIDIA SLI in a x16/x16/x8/x8 configuration.

Networking capabilities haven’t been neglected either, and you get dual Intel i210AT Gigabit LAN ports and a 10 Gigabit port controlled by an Aquantia AQC107 chip. Most people won’t have use for the latter, but it’s there if you need it.

Furthermore, there’s support for onboard Wi-Fi and Bluetooth 4.2.

Of course, no premium board would be complete without RGB lighting today, and the Aorus Xtreme boasts multi-zone digital LEDs controlled by Gigabyte’s RGB Fusion software. There’s also underglow lighting, which should make for quite a nice effect in any chassis.

However, there are no LEDs on the PCIe and DRAM slots, which makes for a slightly cleaner and more tasteful look.