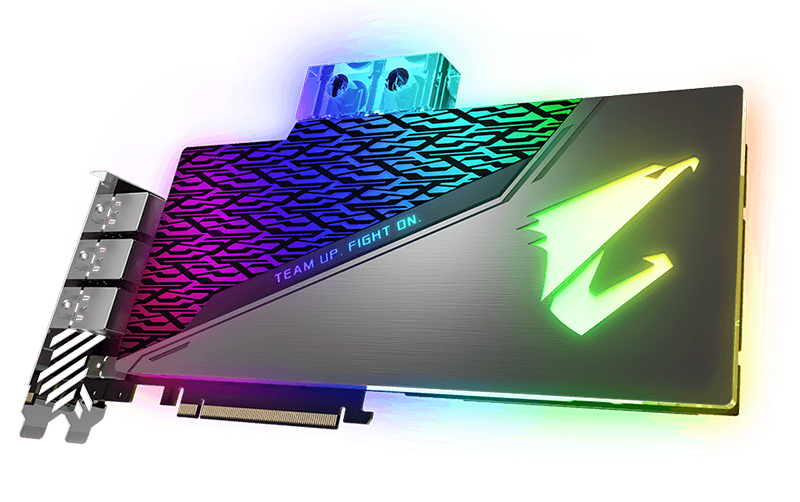 The base plate is in direct contact with the GPU die, VRM, and MOSFETs, and heat is then transferred from these components to the liquid in the water block.

The water block is also where the card shines, quite literally. It’s outfitted with customizable RGB lighting, which can be controlled using Gigabyte’s RGB Fusion software. The software also offers nine preset lighting profiles, so you should be able to get things up and running pretty easily.

The Aorus GeForce RTX 2080 Xtreme WaterForce WB is equipped with a 12+2-phase power design, while the 2080 Ti model has a more robust 16+3-phase power delivery subsystem.

Both cards also come with a slight overclock over the Founders Edition models, with the GeForce RTX 2080 sporting a 1,890MHz boost clock and the 2080 Ti a 1,770MHz boost clock. In addition, they both feature two 8-pin PCIe power connectors.

The company is talking up the build quality on the two cards as well. They boast a black metal backplate for structural reinforcement, and the PCB is protected by dust-resistant shields and is supposedly also moisture and corrosion resistant.

Finally, Gigabyte has crammed a total of seven display outputs on the card. You’ll find three DisplayPort 1.4, three HDMI 2.0b, and one USB-C VirtualLink connector round the back, which is probably more than anyone needs.