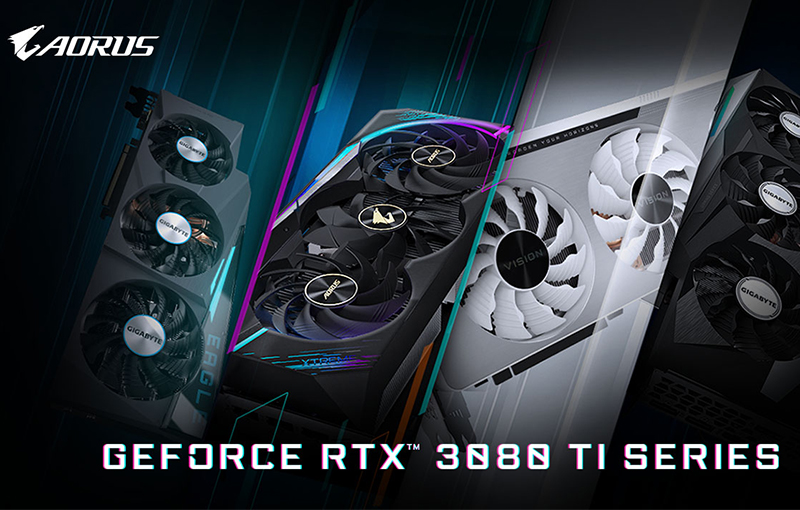 NVIDIA’s board partners have been remarkably prompt in introducing their custom card offerings for the GeForce RTX 3080 Ti. Unlike what we have seen with last-gen GeForce RTX 20-Series, partners' selections of cards are much more limited now due to the severe global shortage of semiconductors (no thanks to the current Coronavirus pandamic and crypto-mining craze). ASUS for instance, only mustered three different GeForce RTX 3080 Ti models to focus on. With the GeForce RTX 2080 Ti, they had seven different cards based on that GPU.

Gigabyte, on the other hand however, has gone full swing and announced no less than six different RTX 3080 Ti and five RTX 3070 Ti models graphics cards. These range from the flagship Aorus series, with its factory overclocked chips and superior components right down to the more basic "standard" Eagle series. In between there's also the Gaming OC, Windforce and Vision series. Each series defined by the different quality of parts used such as cooling systems or in the case of the Vision OC cards, which are essentially Gaming OC cards but comes in a lighter shade of colours such as silver and white and made to complement an all-white PC aesthetic - and are targeted at content creators.

Then there's the Aorus Waterforce series, which is Gigabyte's solution for extreme overclockers who want to push their card's performance beyond its default clock speed. They come in two models, Aorus Xtreme Waterforce WB and the Xtreme Waterforce, and is only available for the GeForce RTX 3080 Ti.

The Xtreme Waterforce WB is an open loop card and comes designed with Gigabyte's patent-pending “Leak detection” technology, that alerts users by flashing light at the first sign of a leak. According to Gigabyte, Aorus provides optimal channel spacing between the micro fins for enhanced heat transfer from the GPU via stable water flows. The sunk-designed copper micro fins also shorten the heat conduction path from the GPU, so that the heat can be transferred to the water channel area quickly.

The Xtreme Waterforce, on the other hand, comes with an all-in-one easy to install cooling solution. The large copper plate and heat pipes contact the GPU, VRAM and other critical parts, so that heat can be transferred to the double size 240mm aluminum radiator, where its two 120mm fans help to keep the card more stable and cooler under high overclocks.

At the moment, only the Gaming OC and Eagle series of Gigabyte's GeForce RTX 3080 Ti are available, with an SRP of S$2,659 and S$2,499 respectively. The Aorus, Windforce, Vision and Waterforce will be available at a later date.

Join HWZ's Telegram channel here and catch all the latest tech news!
Our articles may contain affiliate links. If you buy through these links, we may earn a small commission.
Previous Story
The Samsung Galaxy Z Fold3 and Z Flip3 could launch at lower price points
Next Story
Bloober Team's The Medium might be headed for the PlayStation 5