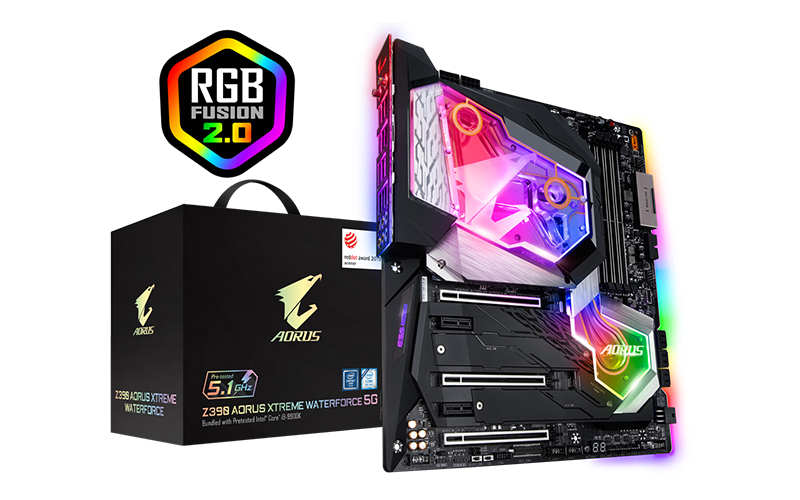 Overclocking can be tedious and time-consuming business, but Gigabyte wants to make things slightly simpler. The company has announced the Z390 Aorus Xtreme WaterForce 5G Premium Edition Bundle, a motherboard and processor package that includes an Intel Core i9-9900K that has been handpicked and pre-tested for overclocking.

Gigabyte says that the CPU in every 5G Premium Bundle will be able to hit 5.1GHz on all cores and ship with what it says is a "highly efficient" thermal paste. In addition, the BIOS has been pre-tuned so you won't have to configure the settings manually, thus avoiding potential complications and helping you hit a 5.1GHz overclock or higher.

The motherboards have also supposedly undergone stress testing at higher loads compared to that of standard configurations to ensure their reliability and stability at high overclocks.

The Z390 Aorus Xtreme WaterForce comes with a massive built-in cooling monoblock that extends from the CPU and VRM components to the PCH. There's also integrated leak detection that will automatically activate a protective mechanism if any liquid coolant is detected on the monoblock. It looks pretty good as well, featuring customizable lighting zones with digital LEDs.

“Slight differences between consumer processors can often lead to varying overclocking results. Many users who are looking to purchase the i9-9900K may be hesitant because their processor might not be able to perform as expected, leading to less powerful overclocking,” said Jackson Hsu, Director of the Gigabyte Channel Solutions Product Development Division.

The company hopes to reassure these users with the new 5G Premium Edition Bundle and its binned CPU. Furthermore, given that the Core i9-9900K is often in short supply, the prospect of securing a sample that has been certified for overclocking should have considerable appeal for enthusiasts.

Join HWZ's Telegram channel here and catch all the latest tech news!
Our articles may contain affiliate links. If you buy through these links, we may earn a small commission.
Previous Story
Samsung’s 5G chipsets are currently in mass production
Next Story
Huawei Consumer Devices CEO Richard Yu reveals new dual strategy for Huawei and Honor