Gigabyte Announces Four X79 Motherboards to Get You Excited!

Gigabyte Announces Four X79 Motherboards to Get You Excited!

The G1.Assassin 2 is from Gigabyte's G1-Killer series (we have review its predecssor, G1.Assassin early this year) and the board literally packs a piece; in the form of a what appears to be a 9mm Beretta pistol with a menacing skull-and-knife insignia emblazoned on the pistol's handle. This is actually the board's PCH heatsink and it is also connected by a silver heatpipe to the crowning heatsink which cools the board's power delivery system. 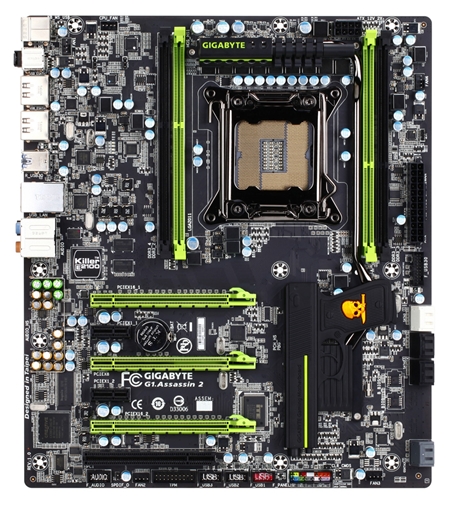 Its lime green color scheme is seemingly at odds with the stealth imagery conjured by its 'assassin' moniker. Drawing reference from the G1.Assassin, this board sports a Bigfoot Networks Killer E2100 Game Networking Platform whose Killer E2100 Dedicated NPU helps offload network traffic from the processor and an on-board Creative Digital Audio Processor handles the sound.The board has two pairs of DDR3 DIMM slots and three lime green PCIe PEG slots. It has a pair of PCIe 2.0 x1 slots as well as a PCI one.

The other three boards belong to the X79 UD (Ultrable Durable 3) series and the top of the line board is the X79-UD7. It is targeted at power users as we see a set of on-board buttons (similar to the Gigabyte GA-Z68X-UD7-B3) next to a series of debugging LEDs. It also features multi-GPU support with 4-way SLI and CrossFireX and just above one of the orange PCIe PEG slot, we spotted two physical BIOS ROMs featuring its DualBIOS technology that protects against BIOS failure. The X79-UD7 looks like it is dressed in the orange flight suit of a X-Wing pilot from the Rebel Forces in Star Wars. In fact, it bears a striking resemblance to the Gigabyte GA-X58A-OC motherboard. 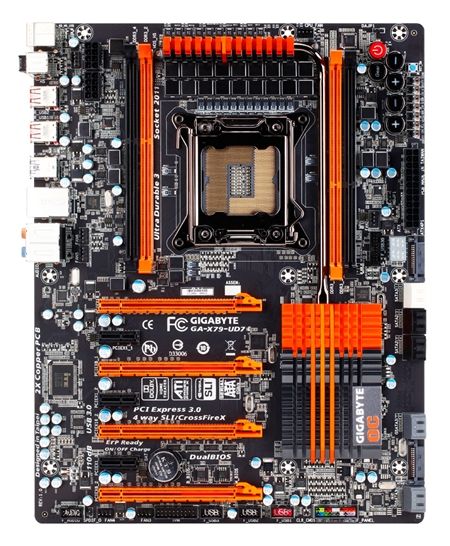 Resembling the insignia worn by an Imperial officer from the Galactic Empire, the X79-UD5's hint of blue against the PCB's black and grey backdrop, makes up the most tasteful color scheme amongst the other boards. It sports four pairs of DIMM slots and has ten SATA connectors for rig builders who have a lot of SATA devices to fit into their rigs. 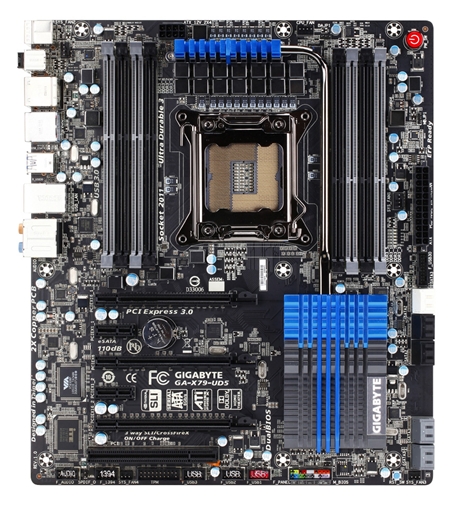 The X79-UD3 has the most muted color scheme of the series with its dark and sombre tones. It has the same number of DIMM slots as the X79-UD7, multi-GPU support as well as USB 3.0 and SATA 6Gbps interfaces. All the boards have distinct color schemes and they feature crenellated heatsinks to cool their on-board PCHs. 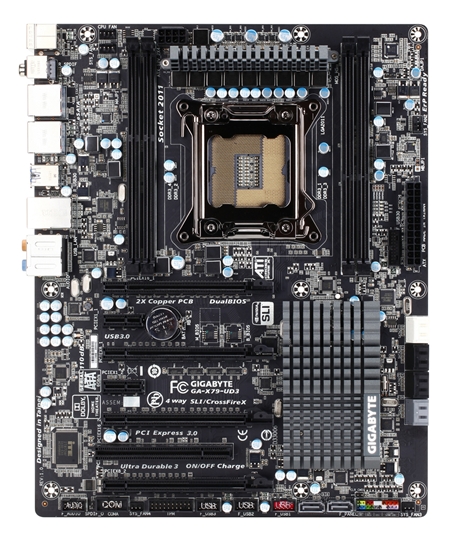 Gigabyte promises to excite us with their new X79 offerings and as prudent and careful people, we will uncover their details when we have the opportunity to test them thoroughly.