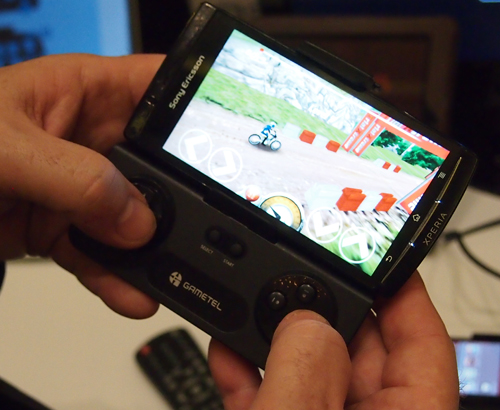 Gamers, especially those who spend most of their waking hours on their iOS or Android devices, realize that gaming with the virtual controls on their smartphones can be a painful affair. Fructel's wireless Bluetooth controller, dubbed as Gametel, provides a viable solution to that problem.

If you think it looks slightly similar to the controller on the Sony Ericsson Xperia Play, you're right. Basically, there's the directional pad on the left, four buttons on the right, and two shoulder buttons for additional input hidden behind the device. Gametel is compatible with both iOS and Android devices, though you'll need Android 2.1 and above and Apple iOS 4.0 and above for the smartphones. We also saw Gametel in action with an iPad, so you can just leave the iPad on the table and game with it without touching the screen.

We had a quick hands-on with the controller, and the controls are pretty responsive. The adjustable clamp is particularly useful to fit smartphones of various sizes onto the controller. The beauty of this controller, is how it gives you the full screen real estate for gaming since the virtual controls are no longer displayed.

Though almost every other mobile device works with Gametel, there is a finite list of games that are compatible with the controller. Along with a current line-up of 23 compatible games, including No Gravity, Silverfish, Super Crossfire HD and Terra Noctis, Gametel for iPhone and iPad also supports iCADE’s suite of classic retro games with over 100 titles available to download from the Apple iTunes App Store.

Android users will have more to choose from, with over 50 compatible games are available to download from the Android market, including popular titles like Cordy, Asphalt 5 HD, Reckless Getaway, Guns’n’Glory, MotoX Mayhem, Happy Vikings and Zenonia. The list of games are growing as more developers add support for Gametel onto their apps.

Meanwhile you can download the app from Android Market, which lets you connect your Android device to Gametel. Fructal stated that the iOS app will be coming soon, pending the final approval by Apple for the App Store. According to a spokesperson from Fructal, Gametel will be available in the US within the first half of 2012, with no pricing available at this point in time. The company isn't able to comment on its availability in the Asia Pacific region, but we aren't ruling out the possibility of a local distributor bringing the device into their region.

Join HWZ's Telegram channel here and catch all the latest tech news!
Our articles may contain affiliate links. If you buy through these links, we may earn a small commission.
Previous Story
Zensorium Launches Blood Oxygen Level Monitor for the iPhone at CES Unveiled 2012
Next Story
ASUS Launches its New Graphics Card Featuring AMD Radeon HD 7970