At his keynote address at GTC 2012, NVIDIA CEO Jen-Hsun Huang announced a new technology based  on its newly launched Kepler GPU called VGX. This new virutalized Kepler GPU technology enables the graphical prowess of the GPU to be harnessed by cloud technology and delivered to remote locations without the need for high-end discrete graphics solutions to render or stream such data feeds. In fact, during the Q & A session that followed his keynote address, CEO Huang said that any commonly available H.264 decoder is capable of rendering such remote data streams from VGX, bringing the convenience of enjoying the graphical richness of Kepler GPU to new levels. 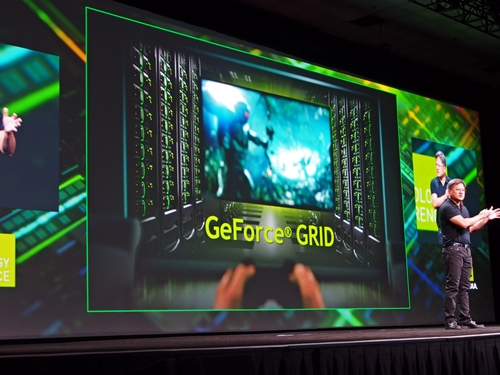 There are a host of features and services built around VGX but one of the most interesting aspect of VGX is GeForce GRID. This technology comprises customized NVIDIA software and GeForce GRID-compliant Kepler-based graphics cards. The main application of GeForce GRID is in cloud gaming and it will enhance the online gaming services provided by companies like Gaikai (based in the US) or Ubitus (based in Taiwan with services in Taiwan, Japan and Korea).

The main beneficiary of GeForce GRID is the consumer who is able to enjoy the latest and most hardware-intensive games without the need for any hardware investment. For those who are worried about latency that will greatly affect their gaming experience, NVIDIA claims to have solved this problem by leveraging on Kepler's newly announced low latency remote display technology. Huang said, "We're taking the GPU into the cloud. Kepler is the first GPU designed for the cloud." With such astounding new technology revealed, NVIDIA has set its sights for the skies. Stay tuned as we reveal more of his keynote address in a subsequent article.