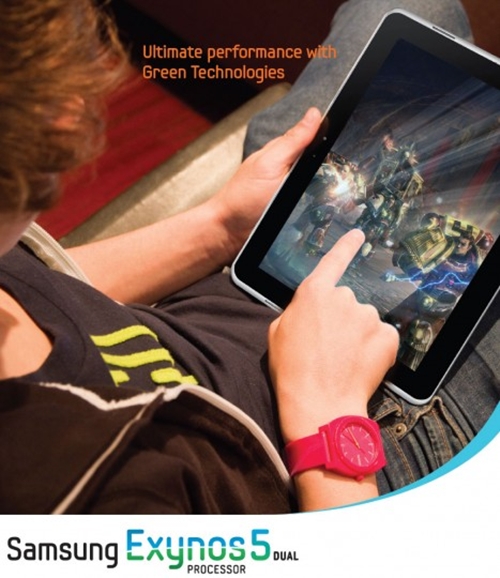 The alleged 11.6-inch high resolution Samsung tablet might have made its first appearance on the company's Exynos 5 advertisement since rumors of its existence started circulating last December.

According to Android and Me, the device shown in the advertisement is unlikely to be the Samsung Galaxy Tab 10.1-inch or its N variant sold in Germany as they run on Tegra 2 dual-core processors, not the upcoming Exynos 5250 dual-core processor.

While it bears some resemblance to the Galaxy Tab 2 10.1 and the Galaxy Note 10.1, the speaker grills on its sides and texture of its chassis seem to be very different from the other two models. In addition, the device also appears to be marginally longer.

The Samsung Exynos 5 product page states the processor as being designed specifically for high-end tablets. It is the industry's first low power dual-core Cortex-A15 processor that offers clock speeds up to 2GHz. Power consumption is said to be 30% lower than 45nm process of the previous generation processors such as Qualcomm Snapdragon S2/S3 and Texas Instruments OMAP 4430/4460.

Although current screen sizes of tablets in the market max out at 10.1-inch, Toshiba displayed a 13.3-inch tablet prototype during CES 2012 that may hit retail stores later this year. Other manufacturers are likely to follow suit and launch tablets with bigger screen sizes in the near future.

Taking into consideration that Samsung has introduced a wide range of tablet screen sizes (7-inch, 7.7-inch, 8.9-inch and 10.1-inch), we won't be surprised if it has the Galaxy Tab 11.6 in its product pipeline.

Source: Samsung via Android and Me

Join HWZ's Telegram channel here and catch all the latest tech news!
Our articles may contain affiliate links. If you buy through these links, we may earn a small commission.
Previous Story
Instagram for Android: Open for Registration Now!
Next Story
NVIDIA CEO Congratulates Staff on Successful Kepler Launch