Galactus is descending upon Fortnite in the game's biggest event ever

Galactus is descending upon Fortnite in the game's biggest event ever 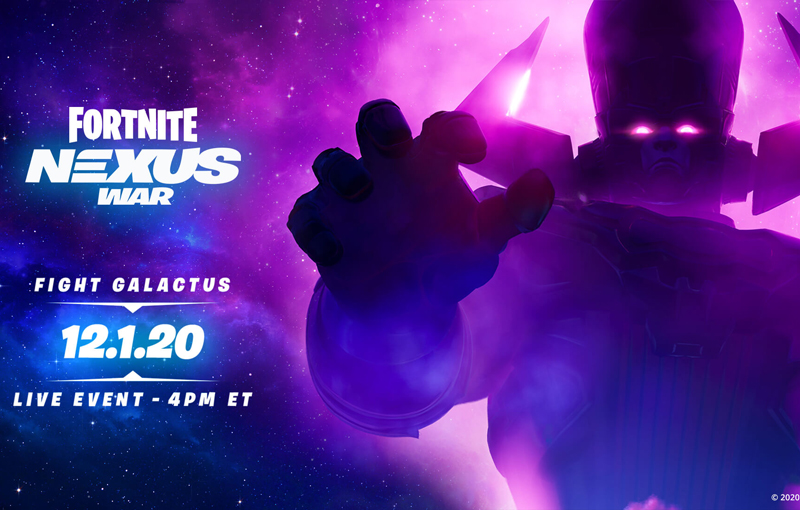 The devourer of worlds approaches!

Fortnite Chapter 2: Season 4 is set to end with a bang when Galactus finally arrives in-game. Throughout the season, developer Epic Games has teased the Marvel villain’s impending arrival, but things are coming to a head now. Galactus will show up in the one-time-only Nexus War finale live event that begins on December 1, 2020 at 5am (Singapore time).

Not much else is known about the Nexus War finale, but Fortnite’s live events tend to be big, spectacular things. Remember the time a giant mech came to life and fought a kaiju on the map? Good times. Whatever happens, this will be the biggest event to hit the game so far - even bigger than the one that shut Fortnite down.

According to a Fortnite leaker, game director Donald Mustard has referred to the event as, “the biggest event they’ve ever done.” This might be an understatement. According to Fortnite dataminers, the event update contains two encrypted data packages - one containing 721MB of data, and the other 500MB. These data packs are apparently two times bigger than the biggest event pack the game has ever had, and they’re compressed too - so their actual size is way bigger.

And then you have the leaks. Reputable leakers such as ShiinaBR outright refuse to spoil the event’s biggest surprises, instead saying it will be, “the best event we ever had.” The game will also likely shut down for a while again, with some speculating that Galactus will somehow win against the Marvel heroes and destroy the entire map.

During an appearance on the This Week in Marvel podcast, Mustard explained that this season’s Marvel crossover has huge implications for the future of Fortnite Battle Royale. He said. “The reason we called this season Nexus War is that this is just the start of lots of stuff we have planned for many years of Marvel integration.”

Mustard went on saying, “This is not the end, this is the beginning. We thought a really good POV-style character which could set this up was Deadpool, kind of fourth-wall breaking. And then Cap in July, building up to this moment…”

While it’s unlikely that Fortnite Chapter 2: Season 5 will end up being another Marvel-themed season, one can expect even more crossovers to come as the game goes forward. Fortnite is still young after all, and there’s plenty of room to grow. In case you missed it, Fortnite is also getting some neat next-gen upgrades!