Note: This article was first published on 15 July 2020 and it's republished because the watch goes on sale today. 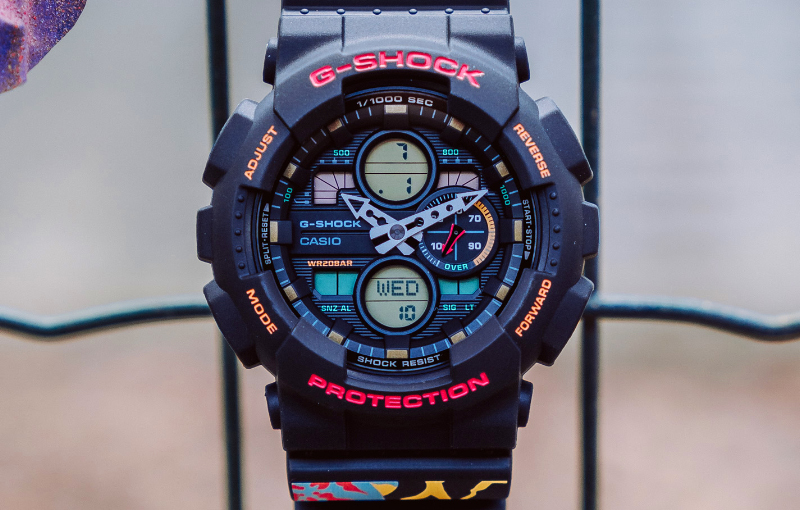 2020 marks the 55th anniversary of Singapore's independence and G-Shock is collaborating with local artist and illustrator Adeline Tan, aka mightyyellow, to create a limited edition watch.

This is the G-Shock x mightyyellow GA-140 Limited Edition watch. It's based on the GA140, which is one of G-Shock's most popular analogue-digital watches. There isn't any overt allusions to Singapore's birthday. Instead, the watch features fiery and dynamic motifs that is supposed to invoke the tropical landscape of Singapore and celebrates the diversity and resilience of its people. It also comes in a specially designed box. Adeline Tan said of the collaboration:

Two years after independence, Singapore set herself a vision to become a garden city. From wild mangroves and jungles to orchids and gingers, the little island reinvented itself over and over. At 55 years of age, it is a metropolis that kept her biodiversity thriving and her people adaptable. This design is inspired by her ever-changing landscape.

Like all other G-Shock watches, the G-Shock x mightyyellow GA-140 Limited Edtion watch is water resistant to 200 metres and features a long list of functions including world time, a 1/1000 stopwatch, a countdown timer, and the ability to set up to five alarms. The G-Shock x mightyyellow GA-140 Limited Edtion watch will go sale on 25 July 2020 and will be priced at S$219. It will be available at all G-Shock boutiques except the one at IMM.

Join HWZ's Telegram channel here and catch all the latest tech news!
Our articles may contain affiliate links. If you buy through these links, we may earn a small commission.
Previous Story
Malaysian minister says that all filming needs a licence, even on social media
Next Story
Intel is delaying the rollout of its 7nm processors until 2022 or 2023