Fun and customizable LG AKA smartphones now available in Singapore 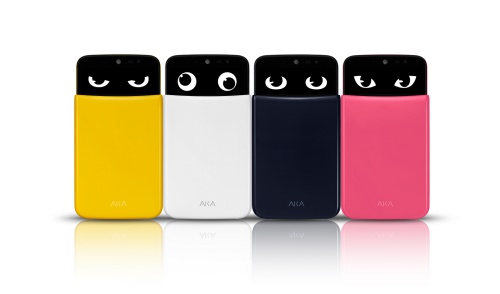 With the AKA smartphones, LG proves to the world that smartphones can be more than just touch screen devices.

Originally designed for the South Korean market, the AKA smartphones were introduced at the end of last year and received very positive feedback from the market. What made them a hit among consumers? Well, the AKA series have four different personas:

Each AKA smartphone has a MASK (the colored portion) and a pair of animated eyes that interact with you. You can wake up the phone by tapping on the exposed screen twice and the pair of eyes will greet you. Plugging in a pair of earphones will also make the pair of eyes put on its own too! The eyes can also tell you how charged your battery is.

Preloaded on the AKA smartphones are unique UX features such as Art Toy Figurine where snapping a photo of the figurine with the Snapshoot tool creates an animated 3D version that appears alongside selfies. LG Singapore is also selling the AKA Accessory Pack consisting of stickers, casing and figurine at $68, which you can use to customize your AKA smartphone.

You can check out the AKA character mascots live in action over the next three Saturdays at Jurong (2 May), Bugis (9 May), and Tampines (15 May). If you take a picture with the mascot and upload to LG Mobile Singapore Facebook Timeline with #NoPhoneNoFun and #AKAphone, you stand a chance to win an AKA handset.

The AKA phones are powered by a Qualcomm Snapdragon 400 quad-core 1.2GHz processor, 1.5GB RAM, and a 2,540mAh battery. Other specs include a 5.0-inch HD display, Android 4.4 KitKat, an 8-megapixel BSI rear camera with laser autofocus, a 2.1-megapixel front-facing camera and 16GB internal storage space.

The AKA phones are available in pink and yellow with a retail price tag of S$398. You also can get the phones and accessories at M1 and StarHub from 25 April.

Join HWZ's Telegram channel here and catch all the latest tech news!
Our articles may contain affiliate links. If you buy through these links, we may earn a small commission.
Previous Story
The Microsoft Health app now lets you track steps and calories without a Microsoft Band
Next Story
Dropbox adds ability to comment on shared files, working on collaborative editing service