The full specifications sheet for the Samsung Galaxy S20 series has been leaked thanks to MySmartPrice and @IshanAgarwal24.

All three models with 5G support will be powered by Exynos 990 processors and have 128GB as the base storage option. The Galaxy S20 Ultra will come in 512GB variant. All three models support microSD support up to 1TB.

As for the camera specs, the Galaxy S20 Ultra comes with a 108MP main camera, 48MP telephoto camera, 12MP ultra-wide camera and ToF camera. It supports 10x optical zoom and up to 100x digital zoom. For the front-facing camera, it has a 40MP sensor which can record 4K videos at 60fps.

Battery performance will also vary across the three models; the Galaxy S20 Ultra has the biggest battery capacity at 5,000mAh while the Galaxy S20+ and S20 will have a 4,500mAh battery and 4,000mAh battery respectively. The Galaxy S20 series will run on Android 10 and One UI 2.0, and have IP68 water and dust resistance.

Samsung is expected to unveil the Galaxy S20 series at the Galaxy Unpacked event on 11 February in San Francisco. 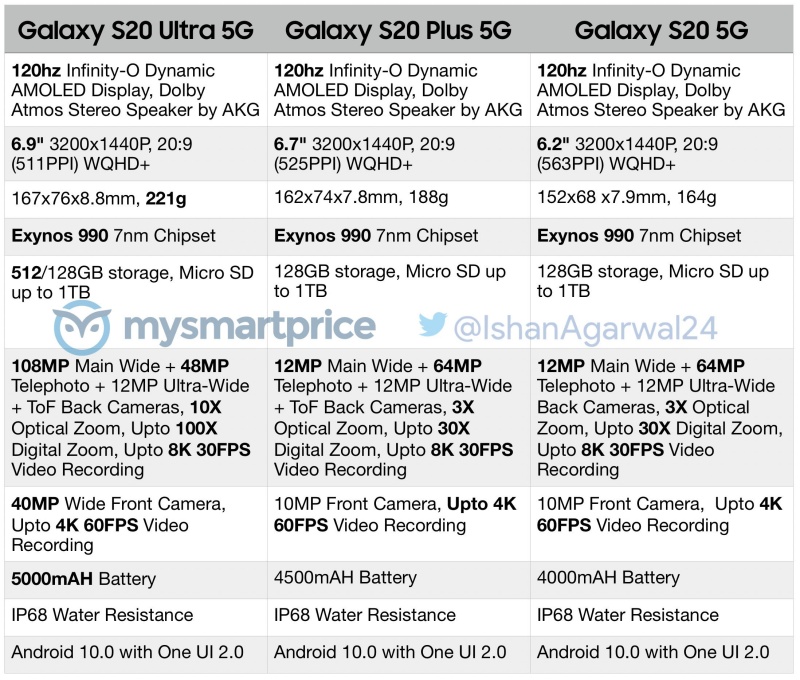