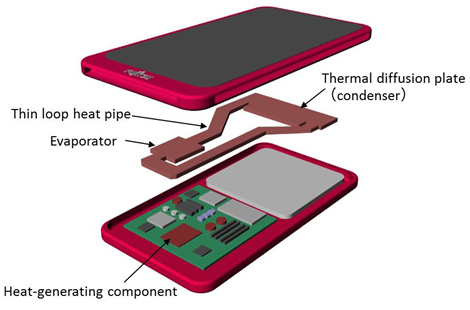 Consumers want ever thinner, lighter and sleeker devices. Apple’s announcement on Monday of its new 12-inch Macbook is yet another step in this direction. The new Macbook measures just 13.1mm in thickness, making it 24% thinner than the previous 11-inch Macbook Air. Japanese electronics maker Fujitsu has just announced the development of the world’s first thin, cooling device designed for small, thin electronic devices, representing another milestone in manufacturers’ efforts to shave millimeters off their devices.

As device makers continue to cram faster processors into smaller form factors, the issue of heat generation and the overheating of localized parts has become one of their main concerns. Fujitsu says that its thin loop heat pipe, which is less than 1mm thick, will be able to solve manufacturers’ problems and enable devices to run cooler and avoid concentrated hot-spots. The new device is based on technologies used in the stacking of metal sheets, and is capable of transferring approximately five times more heat than existing thin heat pipes.

The company stacked together the copper sheets to create a structure with minuscule pores. The pattern of pores in each layer is slightly offset from the adjacent layer, effectively creating the mechanism necessary for the coolant to circulate via capillary action. The coolant returns to the evaporator via capillary action as well, enabling it to reliably transfer heat regardless of the device’s orientation – a crucial feature for use in mobile devices.

Moving forward, Fujitsu also announced plans to develop design and cost-saving technologies for mobile devices equipped with the thin loop heat pipe. It aims to introduce a practical implementation of its technology during the fiscal year of 2017. According to the company, its technology will additionally allow for greater freedom when designing mobile devices because the pipe layout and amount of heat transferred can be customized for each device.

Fujitsu is also exploring potential applications beyond mobile devices, such as in communications infrastructure, medical equipment, and wearables.

Join HWZ's Telegram channel here and catch all the latest tech news!
Our articles may contain affiliate links. If you buy through these links, we may earn a small commission.
Previous Story
Kingston DDR4 SO-DIMMs validated for new Intel Xeon D-1500 SoCs
Next Story
The Razer Blade Pro reforged