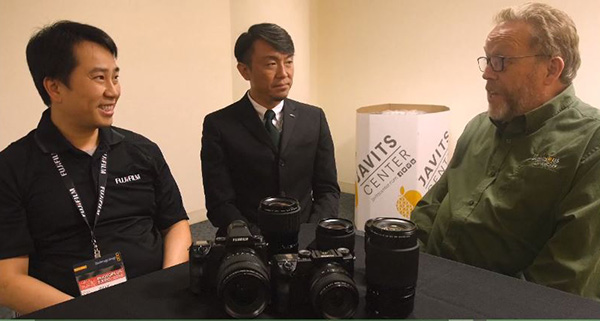 Luminous Landscape has just posted an interview with Billy Luong and Makoto Oishi of Fujifilm that you can watch here. In the video, they go through the GFX 50S (which has also been covered in our first looks piece here) but jump forward to the 8:55 minute mark and they start to discuss some of the latest developments for the camera.

For example, they are already talking to Adobe and other software developers with regards to getting the GFX 50S’ raw files to work with their software. They also mention collaborations with hardware makers, which means it is highly likely Fujifilm will create lens mount converters in the future.

He mentions that Fujifilm could possibly offer their own leaf shutter lens options, but the conversation shifts towards how the GFX system and even the X-series could possibly incorporate a global shutter in the future, which would mean even smaller cameras overall, so that’s something that could be interesting in the future.

Global shutters are not new though; that’s been the key principal of many CCD sensors. It basically means the entire shutter is read simultaneously as opposed to line-by-line, as is the case in rolling shutter cameras. The key advantages and disadvantages in brief:

Global shutter - No rolling shutter effect, possibility of acting like a global leaf shutter (ie for all lenses), but more expensive to develop, more noise, heat and a lower dynamic range.

Rolling shutter – Cheaper to develop, better dynamic range with less heat, but relies on the focal plane shutter of the lens and you tend to get the rolling shutter effect with video where the image is skewed.

Would a global shutter be something you’d like to see in a future GFX camera? It seems like that's a concept that can be implemented in CMOS sensors too, so perhaps the next line of sensor technology will incorporate the best of both worlds.

Meanwhile, Fujifilm has also just released a short video on YouTube that basically has French photographer Philippe Marinig talking about how it feels like to use a prototype GFX 50S. A few stills are shown, but what’s also interesting is that the entire clip was shot on a Fujifilm X-T2 in 4K! Something to check out for those who are also interested in the X-T2’s video capabilities perhaps.