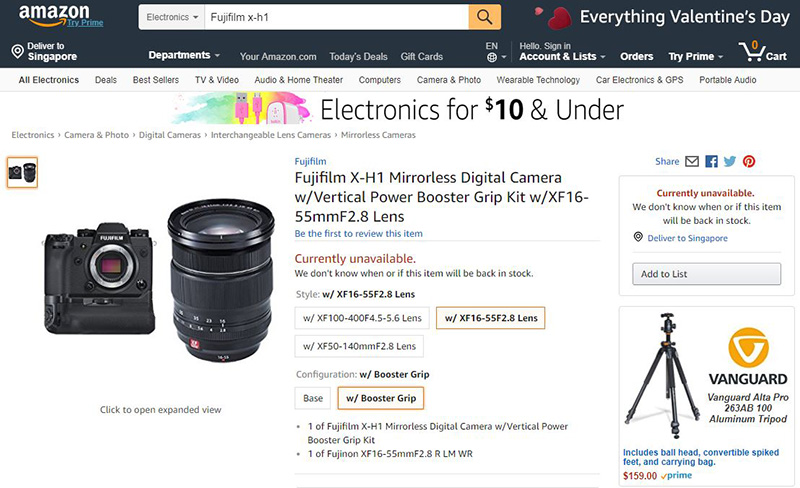 FujiRumors has spotted the X-H1 listed on Amazon US with some of the specifications in the description, confirming some of the rumored specifications from our previous report. As you can see in the image below, the new camera will indeed have in-body image stabilization, and be compatible with all XF and XC lenses, thus confirming the slant towards video performance.

No mention of the sensor that it will use, but the listing does mention a new EVF with x0.75 magnification ratio, and 3.69M dot resolution. That puts it on par with the Sony A9 but still below the 4.4M dot resolution of the EyeRes viewfinder Leica SL. It’s supposed to have a lag time of just 0.005s and a frame rate of 100fps, so there shouldn’t be any perceptible viewfinder blackout.

As suspected, the camera will be geared towards video shooting, with new film simulation modes and a 1080/120p high-speed video mode for slo-motion videos. Interestingly , the body is said to use a thicker material for better surface hardness, and the ability to operate at temperatures down to -10C, so it’s certainly a pro-level body. The option for a booster grip it’s also interesting to note, and we would expect that to be a new design to match the wider body.

The listing (as of time of writing) is still up, so that should be a good indication the camera is coming really soon. Will it be announced today? We’ll find out soon.

Join HWZ's Telegram channel here and catch all the latest tech news!
Our articles may contain affiliate links. If you buy through these links, we may earn a small commission.
Previous Story
ASUS’ new ZenBook 13 ultrabook weighs less than a kilogram
Next Story
Amazon Music app comes to the Microsoft Store