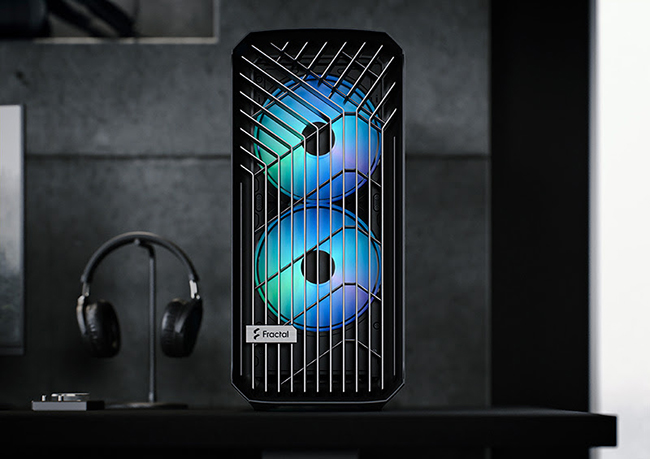 Fractal has announced a brand new case focused on high-performance airflow, and I think it might be one of the best-looking cases in this category. The Torrent is devoted to providing high airflow right out of the box, so you don't have to shop for additional fans to get the most out of it.

There's a touch of modern industrial design to be seen here too, with sleek bars running down the front. This looks much more elegant than the traditional mesh fronts you'd usually see on high airflow cases, and it should allow the RGB fans to pop a lot more. The open front grille also has the benefit of allowing more air to pass through.

The Torrent ships with two large 180mm on the front, alongside three 140mm fans. That's a total of five pre-installed fans, a rarity today. Alternatively, you can replace the three 140mm fans with a second pair of 180mm spinners. You'll have a choice between either Dynamic PWM or Prisma RGB fans, depending on the look you want to go for. An integrated Nexus 9P Slim PWM fan hub helps you control all those fans easily.

Fractal has also implemented a new layout with support at the bottom for extra-large fans to channel air to your GPU. Nylon filters are installed on the front and bottom to keep dust out. They can be removed if you'd like to further increase airflow. In addition, there is space for up to a 420mm radiator at the front and bottom, or a smaller 120mm or 140mm radiator at the rear.

To further simplify the installation process, both side panels utilise a toolless push-to-lock mechanism, so that's fewer screws to fumble with.

The case is available in five different variants, including models with varying levels of tint to the tempered glass:

Join HWZ's Telegram channel here and catch all the latest tech news!
Our articles may contain affiliate links. If you buy through these links, we may earn a small commission.
Previous Story
Bethesda announces yet another Skyrim re-release, this time with fishing
Next Story
Yeedi’s self-cleaning 2-in-1 robot mop and vacuum comes to Singapore