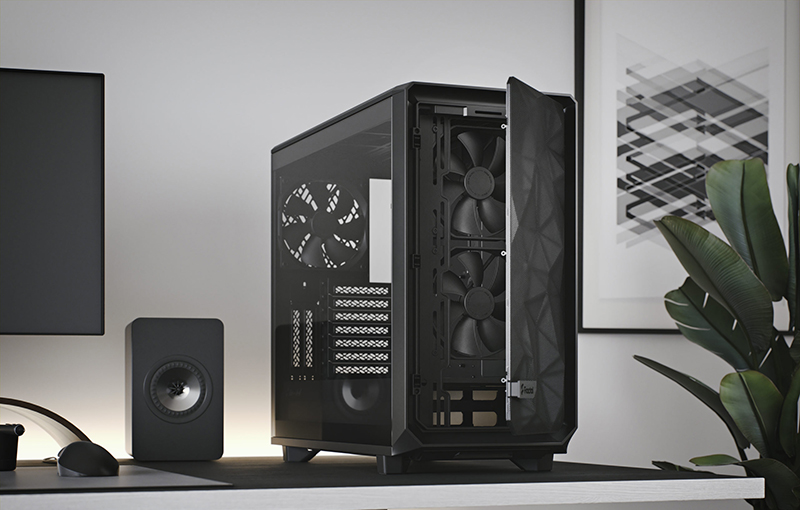 Fractal Design has announced the Meshify 2, designed specifically for optimal cooling and airflow. That's going to be especially important in the coming months, as AMD and NVIDIA take the wraps off powerful components that run hot. The Meshify 2 is built around modularity, flexibility, and pure function – other than the faceted front panel, the rest of the case exudes a utilitarian vibe, with no garish RGB lighting to be found anywhere.

There are actually two versions of the case – the mid-tower Meshify 2 and Meshify 2 XL, which fits extra-large motherboards including the SSI-EEB form factor. That said, both cases are very spacious and feature a flexible dual-layout interior. A movable wall lets you switch between the default and storage layout, the latter of which offers support for up to 11 3.5-inch hard drives, with room at the front still for fans and a radiator.

The included multi-bracket also lets you convert any unused fan position into an HDD, SSD or pump mount. Both cases ship with three Dynamic X2 GP-14 fans, with two at the front and one at the rear. In total, the Meshify 2 supports nine 120mm or 140mm fans, while the XL version will take up to 11 120mm or nine 140mm fans.

Elsewhere, Fractal has tried to make the installation process as simple as possible. The entire top panel can be removed, so you can access the interior more easily and route cables in a less cramped environment. The top and front intakes are equipped with high-airflow nylon filters, which can be removed for cleaning. The front filter can also be removed entirely if you want to prioritise airflow.

A detachable PSU cable shield hides your cables, while integrated cable guides with velcro straps further simplify cable management behind the board. Finally, there is a built-in Nexus+ 2 fan hub, which connects up to three PWM fans and six 3-pin fans.

Round the front, you'll find a rich selection of I/O options, including one USB 3.1 (Gen 2) Type-C, two USB 3.0, an audio jack, and the power and reset buttons.

Join HWZ's Telegram channel here and catch all the latest tech news!
Our articles may contain affiliate links. If you buy through these links, we may earn a small commission.
Previous Story
Cooler Master launches mini-ITX V Gold SFX series power supplies
Next Story
PlayStation 5 owners will need PlayStation Plus to back up their save files