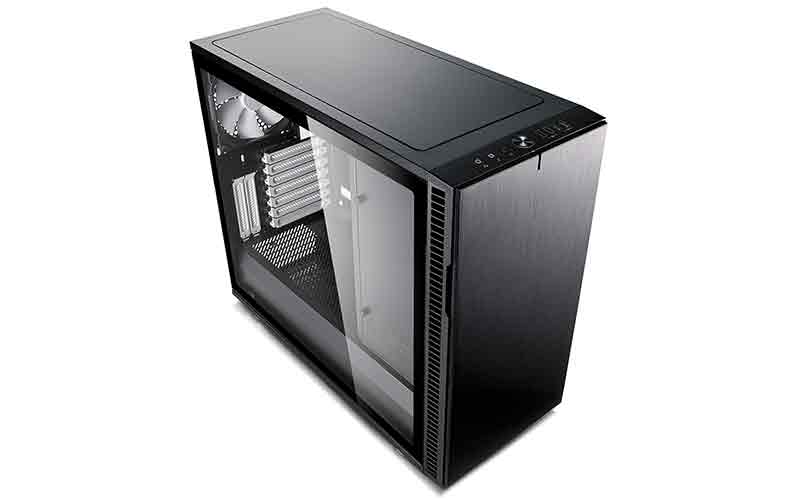 Fractal Design has announced a new addition to its iconic Define series of cases. The new Define R6 shares the same minimalist aesthetic as its predecessors, but it now comes with a redesigned interior that offers improved support for high-end components and greater storage flexibility.

The case is also available with an optional tempered glass side panel, in case you want to show off all your components. Of course, opting for the tempered glass model will compromise the noise suppressing characteristics of the case somewhat, as that side panel is normally covered with sound dampening material.

That said, this applies to the panels on the front and top as well, and the Define R6 was designed primarily for silent operation.

However, the acoustic foam has the downside of trapping heat, and the company has made an effort to improve airflow by including a total of nine fan mounts throughout the case. In addition, you can choose between a steel, sound-dampened top panel and a filtered, multi-fan setup for improved ventilation.

The latter is based on Fractal Design’s third-generation ModuVent technology, and you can switch between the two configurations by unlatching the steel plate, complete with its sound-dampening foam, from the top. 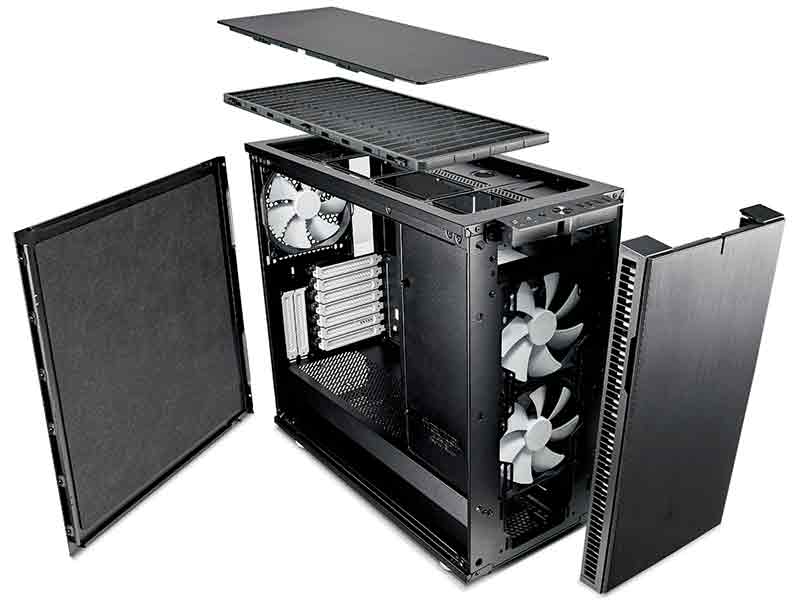 The case comes with Fractal Design’s Nexus+ smart hub, which is mounted behind the motherboard tray and can control up to six 3-pin fans and three 4-pin PWM devices via the motherboard.

The Define R6 also offers considerable flexibility in terms of expansion options, thanks to a semi-modular design. For instance, there are six universal drive trays that can be independently repositioned to accommodate various component, cooling, and cable routing needs.

You can also mount two 2.5-inch SSDs on the back of the motherboard tray or on top of the PSU shroud.

Two different layouts are available – a standard layout that leaves in place the drive cages for more storage drives, and an open layout that removes the drive mounts to create room for better airflow, larger GPUs, and liquid-cooling components.

There’s decent liquid-cooling support as well, and the case will take up to a 420mm radiator at the top, a 360mm one in the front, and a 280mm unit at the bottom.

Finally, the case offers a vertical 2.5-slot GPU mount to better showcase your graphics card. This can be paired with the just-announced Flex VRC 25, a PCIe riser cable kit designed specifically for this purpose.

The Define R6 retails for US$129.99 in black, white, gunmetal, or blackout, while the tempered glass version is slightly more expensive at US$149.99. We’ve been told that the case will be available to buy locally in early January, and will update once there’s news on price.

Join HWZ's Telegram channel here and catch all the latest tech news!
Our articles may contain affiliate links. If you buy through these links, we may earn a small commission.
Previous Story
Future Apple Watches to go beyond basic heart rate monitoring?
Next Story
Apple rumored to be planning to combine macOS and iOS apps to create unified user experience