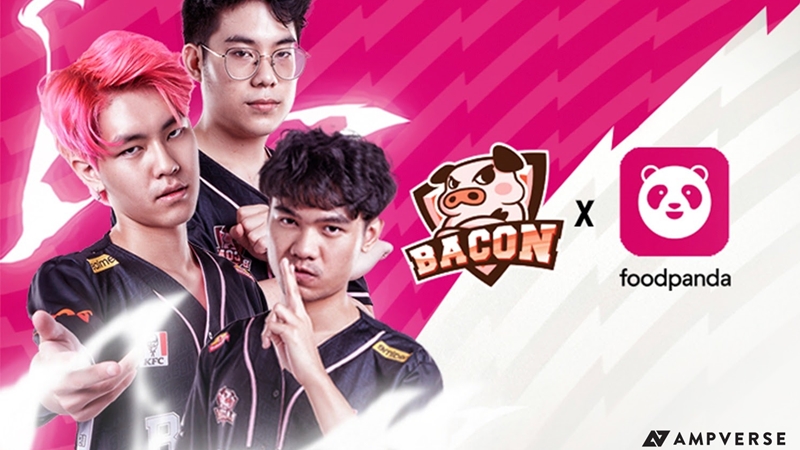 Oh, yes indeed. With how big and prominent the esports industry has become, it's honestly quite fair to say that pro esports gamers have technically achieved "celebrity" status in many respects. Everywhere you look, pro teams are signing up big corporate brands as sponsors and collaborators, just like Foodpanda has recently done with Ampverse's pro team Bacon Time.

Working collaboratively with esports marketing agency SPORTFIVE, the food delivery platform signed a one-year partnership with the Thai esports team, which has so far presented itself as one of Southeast Asia's fiercest competitors. It's not their first rodeo with a food brand, either - Bacon Time is currently collaborating with KFC as well, with their athletes even headlining the fried chicken brand's advertising campaign in Thailand.

Among various other joint projects, the partnership will primarily see Foodpanda and Bacon Time uniting their resources and expertise to generate product placements, always-on digital content, social posts, and other forms of engagement media. Additionally, Bacon Time's Arena of Valor Thailand and PUBG Mobile league kits and other types of professional wear will also be adapted to feature the Foodpanda logo as a way of commemorating the partnership.

According to Ampverse's co-founder and Chief Growth Officer Charlie Baillie, this partnership wasn't just "a natural fit" for both companies involved. It was also one that felt very "authentic" since the team already uses Foodpanda extensively for their meals. His sentiment was echoed by Foodpanda's Marketing Director Thiri Myint, who noted that Bacon Time's "community-first approach coupled with their highly engaged fan base" were key considerations in their decision-making process.

Join HWZ's Telegram channel here and catch all the latest tech news!
Our articles may contain affiliate links. If you buy through these links, we may earn a small commission.
Previous Story
Intel introduces two new 11th Gen processors that brings 5GHz speeds to thin and light notebooks
Next Story
Create an open-air or test bench PC with Cooler Master's new MasterFrame 700 chassis